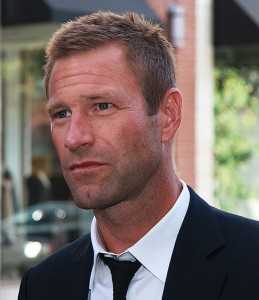 I have to give Roger Ebert some unneeded credit from The Dishmaster.  He’s so brilliant, I often pinch myself about having lived with him in the same era.  In his Battle: Los Angeles review, Ebert basically tore the film to shreds, calling it, “noisy, violent, ugly, and stupid.”  He also asked whether they give “razzies for special effects,” saying that “the lazy editing style assumes nothing need make any sense visually.”  As an example, Ebert said, “From time to time, there’ll be a closeup of Aaron Eckhart screaming something . . . and on either side of that shot, there will be unrelated shots of incomprehensible action.”  To put the nail in the coffin, Ebert closed his review by citing the “Generations of filmmakers [who] devoted their lives to perfecting techniques that a director like Jonathan Liebesman is either ignorant of, or indifferent to. Yet he is given millions of dollars to produce this assault on the attention span of a generation.”  If you’re familiar with Roger Ebert, then you know that you might want to stay out of his way when he hates your movie.  Just ask Rob Schneider and Kick-Ass.  To read a list of the best quotes from Ebert’s review, Movieline laid it out quite nicely.