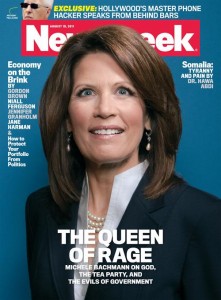 Jon Stewart took aim at Newsweek’s Michele Bachman cover, claiming it was a “petty attempt to make her look crazy,” which is unnecessary, given that Bachman’s words alone substantiate her craziness. So is the liberal media really as biased as conservatives suggest? Probably. But when someone is objectively insane, doesn’t that give Newsweek free reign to draw nutty thought bubbles on her head with arrows that say “this bitc* is crazy!” I realize they are supposed to be an unbiased news source, but I’m not sure I much care whether Newsweek feels the need to use a photo that illustrates her point of view. It’s cheap — but the American people are so lazy these days — they need visual aids. And Newsweek provided one.