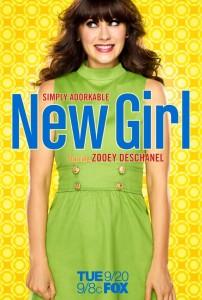 Zooey Deschanel is that rare breed of actress that appeals to both men and women. She’s extremely likable, and her new show, ‘New Girl’, illustrates her understated comedic timing. Did I mention it’s a ratings hit? That is quite the coup, given the likelihood of success in this cutthroat television industry. Deschanel plays “Jess”, a girl in her late twenties that lives with three guys she found on Craigslist after she discovered her long-term boyfriend cheated. Her new roommates help mend her broken heart, and they soon become protective. Despite her looks, Jess doesn’t know her value, which makes her charming. I couldn’t picture anyone but Zooey Deschanel in this role (the casting director deserves a promotion). Because I exited a long-term relationship myself and subsequently found a group of guys to erase my depression, I find this story personally relatable. In fact, I think almost everyone can relate. Watch a clip below.