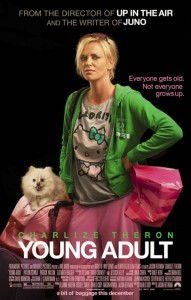 When asked about ‘Young Adult’ at a press conference for the film, Patton Oswalt said, “You have finally made progress as a group when you can be depicted as the full spectrum…a hero, and a villain, and funny, and an asshole just like we all are every second of the day.” If this is true, then women have definitely made progress in Hollywood.

This second collaboration between screenwriter Diablo Cody and director Jason Reitman stars Charlize Theron as Mavis Gary, a teen-lit ghost writer, who abruptly flees Minneapolis for her small hometown to win back a former boyfriend who is now a happily married new father. Mavis lives in a fantasy world not unlike the characters she writes about, only her lifetime of compiling misdeeds and shallow decisions have left her empty and desperate. This is not the typical woman that Hollywood usually offers, but a bold portrayal of a complex female lead character bearing all her strengths and weaknesses. It is a pleasure to have another Reitman film with all the enjoyable laughs of a stylized comedy and the soul of a realistic drama.