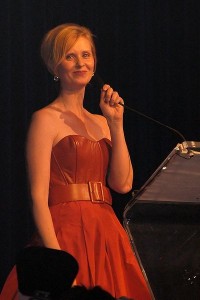 “I gave a speech recently . . . and it included the line ‘I’ve been straight and I’ve been gay, and gay is better.’ And they tried to get me to change it, because they said it implies that homosexuality can be a choice. And for me, it is a choice. I understand that for many people it’s not, but for me it’s a choice, and you don’t get to define my gayness for me. A certain section of our community is very concerned that it not be seen as a choice, because if it’s a choice, then we could opt out. I say it doesn’t matter if we flew here or we swam here, it matters that we are here and we are one group and let us stop trying to make a litmus test for who is considered gay and who is not.” Cynthia Nixon’s controversial comment on whether homosexuality is a choice.

2 thoughts on “Quote of the Day — Cynthia Nixon — Is Being Gay a Choice?”