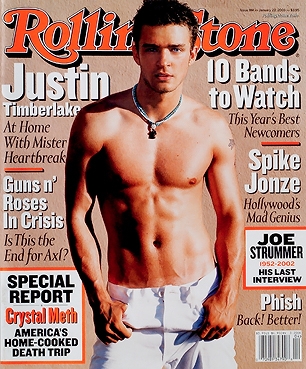 “I’ve had my heart broken plenty of times. Three times, actually. I was fifteen the first time. She cheated on me, and I broke up with her. That’s reason enough, right? ‘Oops, sorry, see you.’ I’d been going with her for a year. The second one I saw for a year and a half. And the third one” – and here he paused, thinking of Spears – “was for three and a half years. It was the same with her as with the first girl who broke my heart and the second. They’ve all gone down the same way. All of them. Three strikes, I’m out. I mean, she has a beautiful heart, but if I’ve lost my trust in someone, I don’t think it’s right for me to be with them. I’m not going to let my baggage with somebody else become my baggage with a new person. But I’ll tell you, man, I have little, little hope. Three strikes. Little hope.” Justin Timberlake told Rolling Stone in 2003 about Britney Spears shortly after their breakup.