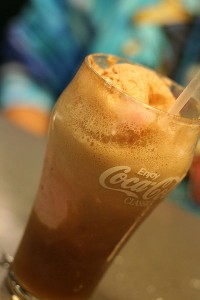 I’ll have a double whopper with fries and two itty-bitty root beers please.

New York City Mayor Michael Bloomberg’s proposed ban on large sodas and sugary drinks was submitted to the board of health on Tuesday. If passed, the ban will take effect in 2013 and be the first of its kind in the country. (Under Bloomberg, NYC has also outlawed trans fats in restaurants and forced chain restaurants to include calorie counts on their menus.)

The proposed drink ban prohibits serving soda or other “sugary” drinks in containers larger than 16 oz – the size of an American pint glass — in NYC’s restaurants, food trucks, stadiums, and movies theaters. The ban would not apply to diet sodas, nor would it extend to drinks sold in grocery or convenience stores that don’t primarily sell carry-out food. Businesses violating the proposed ban would face fines of $200 per failed inspection.

Health advocates and city officials applaud the measure, saying that it will save both lives and money. A spokeswoman for the mayor declared that “sugary beverages are a key driver of the obesity crisis that is killing 5,800 New Yorkers and costing the city $4 billion annually.”

Soft drink companies and restaurants and are less enthused, however. Coca-Cola executives have said that Bloomberg’s ban unfairly singles out and demonizes its industry, and that it is overly simplistic. The complex issue of obesity, says Coke, requires a more sophisticated approach, one which addresses everything from diet and portion sizes to promoting exercise among children to increased parks and recreation spaces. Based on some NYC polls, a slim majority sides with Coke — 54% think that the “super-size drink ban” is a bad idea — while 42% favor it. Many folks on the street, frequently interviewed by local news stations, feel that the ban unduly infringes on their power to choose. “This is America,” they say, “and if you want a 20-oz Mountain Dew, or even a 32-oz Sprite, that’s your prerogative!

In spite of the opposition, however, at least one NYC political commentator says that the ban is a done deal. The measure will not be put to a public vote, or even a city council vote. The NYC board of health, made up of Bloomberg appointees, has the authority to pass the ban after a three-month public comment period.

I find Coke’s cries that Bloomberg is unfairly picking on “the industry” to be unavailing; companies like Coke and PepsiCo generally sell more than soda, and even a substantial portion of their sodas are diet. Under the proposed ban, restaurants and other effected vendors are free to sell all soda in 16oz containers, and there is no ban on giant diet sodas, so I would still be able to have a 32 oz. Pepsi Max with my New York pizza so long as the proprietor carries that particular product.

Maybe this ban on sugary pop will encourage Coke and other companies to produce better diet soda options, and distribute them more widely. That would be great! There needs to be greater efforts in providing me with a palatable diet ginger ale or, dare I say it, grape soda.

Sources say that Coke is actually set to start testing mid-calorie, or light, versions of Fanta and Sprite in select cities in coming weeks. I am intrigued by the advent of light sodas. Pepsi Next, for example, has some sugar (actually, high fructose corn syrup) mixed with some artificial sweetener (you know, diet) making it only 40 calories per serving (see also Dr. Pepper Ten). I find that this combination sharply reduces the “diet” flavor that many folks detest.

But I am left wondering if the Bloomberg ban will apply to these “light” sodas. They are part diet, after all.