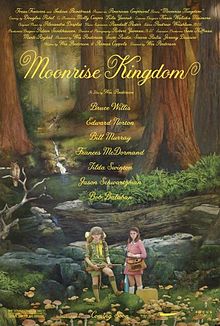 Wes Andesron’s latest entry into the Museum of Quirk is “Moonrise Kingdom,” or as I like to refer to it, “Wes Anderson’s Bible Stories.” Set in 1965 New England, two pre-teen lovers, Suzy and Sam (newcomers Kara Hayward and Jared Gilman, respectively) begin a lengthy pen-pal courtship and decide to run away, putting the local sheriff (Bruce Willis), Sam’s scout master (Edward Norton), and Suzy’s parents (Frances McDormand and Anderson mainstay Bill Murray) on the alert – not to mention the dozen or so Khaki Scouts who are also dispatched to find them.

See if you can pick up a pattern here – Sam and Suzy find their own personal EDEN but are soon forced out of it by the adults, a big flood endangers NOAH’S Church, in which the Khaki Scouts disguise themselves as ANIMALS to aid Sam & Suzy’s flight… yes, Wes hit the Good Book as inspiration. As with every Anderson film, the production design is stunning and the kids are solid along with the newcomers to Anderson’s repertory company (and nary a Wilson Brother in sight), but the tone is so subdued and lightweight that it’s hard to believe that this is the guy who wrote and directed “Rushmore,” with its punk attitude and British Invasion-based soundtrack. It’s entertaining, it’s never dull, but it feels very slight – cute and maybe a little twee, but I’d probably put it somewhere in the middle of Anderson’s oeuvre.