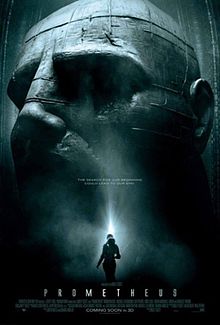 Two scientists (Noomi Rapace and Logan Marshall-Green) discover a series of cave paintings that indicate the possible existence of the origin of man, so they board a spaceship with a terse captain (Charlize Theron), a tough pilot (Idris Elba), a benign android (Michael Fassbender) and a bunch of other folks who make no impression whatsoever to explore another planet. However, it’s not too long before they start getting attacked by… something, and this all ties into the first Alien movie somehow too.

Given the level of anticipation built up for Prometheus, (it’s got the Aliens in it! And Ridley Scott is back in space! And also there’s also 3D!) some letdown was inevitable, but I was not expecting how much I’d truly dislike this movie. The movie feels like a cobbled-together collection of scenes with no build, no solid throughline, and zero tension. Sure the effects are decent (although the 3D is so negligible that it needn’t have been employed at all), but they’re at the mercy of a script with forgettable dialogue, enigmatic characters who don’t seem to have any motivation for the way they behave from one scene to the next, and indifferent performances (everyone’s raving about Fassbender’s android, but I’ll take Ash or Bishop any day over this clod). There’s exactly one scene that grabbed my attention (imagine if John Hurt had a little mechanical help extracting his little friend in Alien, and you’re close), but it’s been quite some time where I’ve been so disinterested in something so grandiose.