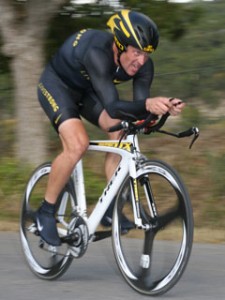 “I refuse to participate in a process that is so one-sided and unfair. Regardless of what Travis Tygart says, there is zero physical evidence to support his outlandish and heinous claims. The only physical evidence here is the hundreds of controls I have passed with flying colors. I made myself available around the clock and around the world. In-competition. Out of competition. Blood. Urine. Whatever they asked for I provided. What is the point of all this testing if, in the end, USADA will not stand by it? . . . . I know who won those seven Tours, my teammates know who won those seven Tours, and everyone I competed against knows who won those seven Tours. We all raced together. For three weeks over the same roads, the same mountains, and against all the weather and elements that we had to confront. There were no shortcuts, there was no special treatment. The same courses, the same rules. The toughest event in the world where the strongest man wins. Nobody can ever change that. Especially not Travis Tygart.” Lance Armstrong, on why he’s given up the fight against the USADA’s never-ending witch hunt and subsequently been stripped of his titles.