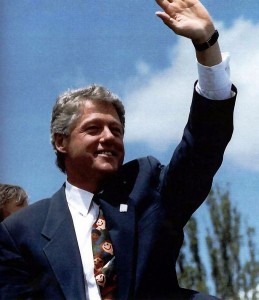 After a powerful warm-up act from Massachusetts Senate candidate Elizabeth Warren (who may or may not owe American Indian delegates some answers about her prior claims of Native ancestry) and a brief introduction from Los Angeles Mayor Antonio Villaraigosa, Bill Clinton took the stage. He was looking particularly lean and mean — that is, in his exceedingly kind and charming way — as he addressed the packed house at the Time Warner Cable Arena in Charlotte, N.C.

“We are here, to nominate a president, and I’ve got one in mind,” said Clinton. He went on to explain that, for our President, he wants “to nominate a man who’s cool on the outside, but who burns for America on the inside.” Shortly thereafter, he nominated President Barack Obama to be the standard bearer of the Democratic Party.

After a lengthy round of exuberant applause, Bill wasted no time picking apart and deftly challenging the “alternative universe” spun by Republicans at their National Convention last week. It was incredible. He astutely, and diplomatically, shifted his focus at various points from Republicans in general to the far-right folks who are controlling that Party. He called them out for lacking facts. He called them out for being too hateful. And then he eschewed trickle-down economics.

As expected, he also articulately broke down the extent of Obama’s accomplishments and explained why he should have four more years. He acknowledged that we still have many problems with the economy, but explained that President Obama stopped the slide into recession and put the country on the long road to recovery. He emphasized that Obama “started with a much weaker economy than I did,” explaining that no one could have repaired all the damage that he found when he came into office in just four years.

President Clinton then hammered on the jobs issue with numbers, analogies to his own presidency, and hope. One of his major themes was “broadly shared prosperity.” He advised, if you renew the President’s contract, you will feel it.

Clinton pushed back against the Republican right’s unrealistic anthem that every single person made it all on their own — by the bootstraps and with no help from anyone. He said that “we are all in this together” is a far better philosophy than “you are on your own.” Brilliantly simple, and very true!

After 48 and a half minutes, Bill wrapped it up by encouraging people to go out and vote, and to vote for President Obama.

Then Obama walked to meet Clinton; he gave him a very real handshake and an authentic hug. Those two dudes look great together. This was an amazing night.

Today was the second to last day of the Democratic National Convention. Tomorrow night is Obama!