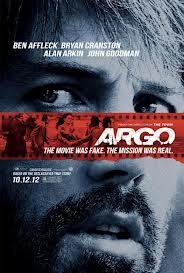 In the early days of the Iran Hostage crisis, six Americans in the Iranian Embassy escape to the Canadian Ambassador’s house, and CIA Operative Tony Mendez (Affleck) comes up with the only feasible plan to get them out. He plans to enter the country under the pretense of being a Canadian filmmaker scouting locations for a Hollywood film, and he’ll have the hostages pose as his movie staff. Once there, he’ll take them out as a team. His stateside helpers include: members of the CIA (Cranston, most notably), a gruff veteran producer (Arkin, signing on as a fake producer to make the story more believable) and a cheerful makeup artist (Goodman, who also helps to sell the Hollywood ruse). Once Mendez enters Iran, the problems arise. It’s not nearly as easy as it seems, and the story unfolds in one of the most suspenseful films in history.

Affleck’s winning streak as a director continues, armed with great performances, terrific dialogue, outstanding music cues (Van Halen’s “Dance the Night Away” for the win), and the best late 70s period design since “Boogie Nights” — right down to the Warner Bros. logo that opens the movie (a KILLER touch). Though I wasn’t thrilled with Affleck’s decision to underplay his role, by the third act it’s irrelevant. This film is an easy contender
for multiple Oscars.