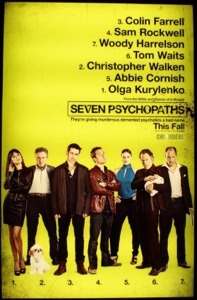 It’s Meta time as screenwriter Martin (Colin Farrell) is blocked, so he decides to write a script called “The Seven Psychopaths.” When he’s not writing (and we’re not seeing what he’s writing acted out for us), we’re treated to a look at his off-kilter friends, including Billy (Sam Rockwell), a kidnapper of dogs who, along with his pal Hans (Christopher Walken, in all his glorious, glorious Walken-ness), gets them all in over their heads when they abscond with a Shih Tzu that belongs to sociopathic gangster Charlie (Woody Harrelson).

Writer Director Martin McDonaugh (who previously worked with Farrell in In Bruges) doesn’t have a solid handle on tone – the action veers from absurdly gory to flat out dull, often within the same scene. But was that intentional? Using Charlie Kaufman’s Adaptation start-up kit, McDonaugh (through the vessel Farrell) is comments on the action, but the ratio of success is pretty much 50-50. Regardless, no one has a way with a line of dialogue like Walken, who may have evolved into self-parody years ago, but is still a true original. Some welcome faces pop up in brief cameos, and between Walken, Harry Dean Stanton, and Tom Waits, it fulfills its “grizzled character actor” quota and then some. Overall, it’s clever enough to recommend, but curb your expectations and you’ll enjoy it.