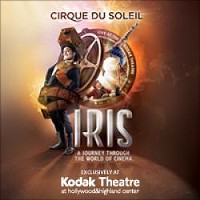 I saw Cirque De Soleil’s ‘Iris’ shortly before it opened. I remember thinking it was ambitious venture, especially considering the rumored $100 production costs, combined with it’s exclusive use of the Kodak (except for the Oscars, of course). The hope was it would become a Los Angeles staple generate a lot of money for the city. Unfortunately, the plan failed, and I can’t say I’m surprised. When I went to the show it felt as I was getting hit in the face with glitter for over an hour. It’s cinematic theme also suffered, as most of the performances didn’t properly align with the message. It’s sad for the brand itself, considering a number of other show that haven’t stuck. My advice for future endeavors can be summed up in three words: light and shade. Having said all that, I am sad they couldn’t save it. Those performers are some of the most talented folks I’ve ever seen.