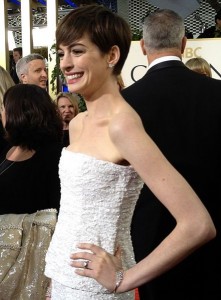 A writer by the name of Sasha Weiss took the time to write a ridiculous piece defending Anne Hathaway by explaining why she’s unlikable, and it nearly made my head explode. According to Weiss, the public dislikes her because “she represents the archetype of the happy girl, which is one that many people resist.” There are also other ludicrous explanations that I cannot repeat for fear that I’ll become physically ill. I resent the implication that the public likes to take “happy-girls” down a peg.

If Ms. Weiss is reading this, I’d like to educate her on the true reason for the public’s dislike. Hathaway appears inauthentic, insincere, and disingenuous. The public likes authenticity, and that’s why Jennifer Lawrence has become so popular. You cannot fake these things. If you practiced your Oscar speech in front of a mirror your entire life, then it will appear canned — as it did. Furthermore, who on earth would think it’s okay to utter something as pretentious as “Here’s hoping that someday in the not too distant future the misfortunes of Fantine will only be found in stories and never in real life.”