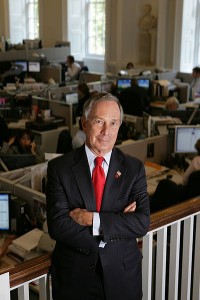 Once upon a time, I lived with a certain individual that asked me to remove candy from our apartment. She insisted the temptation was too much, and asked me to respect that our different metabolisms meant she could not engage in my habits. I thought long and hard about the request, and I chose to keep the candy. Why should I forgo my indulgence for someone who over-indulges?

When Mayor Michael Bloomberg announced his plan to limit the size of soft drinks sold in restaurants, movie theaters, stadiums and arenas to no more than 16 ounces a cup in a bid to fight obesity, I thought of my former living-mate. I also thought of 1984, a tedious high-school book I read that now seems to be a greater reality. Orwell would be outraged.

While I’m not opposed paternalism, it sure as hell better work. And limiting soft drinks only punishes small businesses and consumers like myself while doing nothing about obesity. I like my big coke at the theater, and since I only drink it once a month, I’d like the government to back off. Furthermore, what about those cheesy nachos? Are those next?