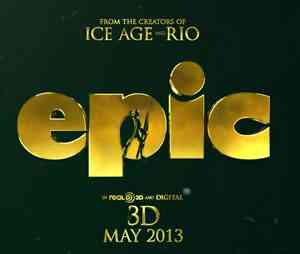 This film brought me back to my childhood. I spent the majority of my youth in a heavily wooded area of rural Texas, and my escape was 50 yards into the forest amidst the insects, birds, squirrels, snails, frogs, and occasional snake. The forest always seemed magical, and ‘Epic’ brought those memories to life once again. The 3D animated adventure comedy is brought to us from the creators of ‘Ice Age’ and ‘Rio,’ and the mythical forest takes center stage. Add in a dysfunctional father-daughter relationship and the classical nature vs. nurture paradox, and the story unfolds.

Professor Bomba obsessively studies the woods, insisting that there are magical creatures within. His strong-willed and stubborn daughter M.K. doesn’t relate to her father’s quest. However, once transported to the world in the woods, she meets her romantic match and counterpoint in Nod, who relates to her individualism and desire to rebel against her parents. Ultimately, both embrace their idiosyncratic qualities while helping to battle evil forces that try to take over the forest.

‘Epic’s’ title properly represents this larger-than-life film. The cast is replete with megawatt stars and platinum musicians, and yet still manages to match its grandeur with a relatable, coming-of-age story-line that brings out the childhood dreamer in us all.