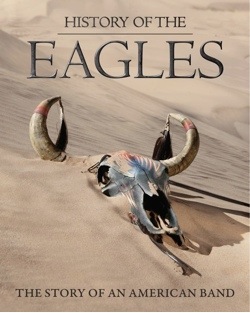 I’m a die-hard fan of The Eagles. My father introduced me at a young age, and I’ve since played their music on repeat. In fact, my seventh grade science teacher had our entire class memorize ‘Lying Eyes’ and sing it every Friday atop our desks (yes, that’s a true story). I’m also avidly intrigued by band histories, and I’ve always been curious about the inner-workings of The Eagles. Is it true they hate each other, as many have suggested?

When I was sent their new documentary, ‘History of The Eagles,’ I was simultaneously elated and skeptical. Would they really reveal what I wanted to know? Would they divulge the actual inside-story of the famous friction that’s been subject to decades of speculation? And lastly, would I learn about what influenced the creativity that’s produced an astounding amount of hits? The answer to all those questions is yes. These guys went for it, and whether you’re a die-hard fan or just an average audience member, this is a nail-biting masterpiece.

Most of my favorite moments in the documentary came from Don Henley and Glenn Frey, the self-proclaimed “leaders of the band,” who meticulously recounted many of the obstacles that led to the band’s breakup. Frey was particularly honest about his friction with Don Felder. One such story involved Felder wanting to sing lead, a desire that Henley and Frey nixed, saying, his voice “wasn’t up to band standards.” According to Joe Walsh, Felder never forgave them, and that animosity, along with squabbles over money, ultimately led to Frey firing Felder. Felder broke down during the documentary while discussing the events. There were a few other entrances and exits throughout the years that are also explained in great detail.

Another moving moment in the documentary came from Joe Walsh, who detailed his journey to sobriety. Frey and Henley asked Walsh to join their reunion tour in 1994 under the condition that he get sober. Walsh immediately went to rehab and has been sober ever since. He thanks his band members for pushing him to clean up.

Not all musicians are capable of providing the details of their career highs and lows, but Don Henley and Glenn Frey are made for it. Henley is so intensely intriguing that I often wondered if he’d done voice-overs for dramatic blockbuster films. He has a line at the end of the movie that I won’t ruin, but it involves rust, and it’s not to be missed. As for Frey, he breaks down all barriers, tells his side of the story, and seems perfectly okay with any reaction his honesty might produce. These guys have guts. And this is worth the watch.

Watch the trailer below.