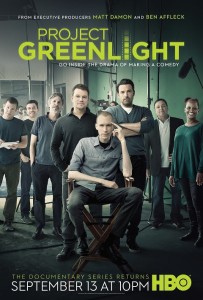 After intensely watching Jason Mann’s meticulous approach to his Project Greenlight movie,’The Leisure Class,’ I had high expectations of the final film. After watching the movie, I can’t help but wonder if Jason’s notorious attention to detail was misplaced, given that a film lives and dies by its script, and this one doesn’t survive. Furthermore, HBO’s truncated timeline and pressure to produce a revised script just days before production began is also at issue, because even the best of writers could blow it. To be fair, Jason’s inability to accept criticism and clearly uncomfortable reaction to his test screening indicates that he might not have listened to the additional notes he needed. Perhaps he would be better served directing another writer’s script, therefore eliminating the biased view of his own product.

The biggest issue with the script is that the conflict is introduced before we get to know the characters, making it far too early for a genuine interest in the result. For instance, without proof in Act One that William loves Fiona and their romance is real, why should it matter if his brother Leonard’s surprise entrance breaks them up? And is William actually interested in Fiona, because he seems a little low-energy for a man about to spend his life with someone. Do we even know what made William lie about his family’s true class? Isn’t some semblance of a backstory key? Additionally, does it make sense to accept such a disheveled, strange “best friend” into the family home without more of an explanation or argument? Without more story in Act One outside of the conflict, the interplay between the conflicting characters becomes exhausting. This dueling-duo formula can only work with the tightest of writing and the strongest of jokes and that doesn’t happen here. Moreover, when William’s true identity is revealed, the ensuing, Act Three events take a bizarre turn. The father’s excessive cursing and physical abuse of his co-star seems off character and strange, especially for his social status. The transition just isn’t believable without peppered hints in the previous acts.

It’s also worth noting that many of Jason’s complaints in the behind-the-scenes episodes leading up to this film were spot on. The location is not elevated enough to seem as expensive as it should, and the infamous car scene that didn’t quite land to Jason’s request ultimately didn’t serve its purpose for Act Two. If it’s a fender bender instead of an alarming, flip-car collision, then what exactly pushes Fiona’s revelation about their romance being an ill fit? And again, why is William so low-energy after being rejected by the woman he loves? That’s a director’s decision, and Jason should have dictated that William exhibit more light and shade to his approach. Jason was also correct about the creative value of shooting on film instead of digital, and the result is noticeably more beautiful. One might suggest an audience’s eye can’t tell the difference, but that’s a drink-the-juice adaptation to the changing market, and it’s simply untrue.

Despite all of the aforementioned notes, I must say that for his first feature film, Jason Mann likely has a great career ahead of him. We don’t all creatively land upon our first try, and this movie has enough impressive elements to learn from and use in the next. My only hope is that he begins to compromise and accept the view of others. There’s a notorious struggle between the big studios and their creative hires, and no director wants to take notes from the powers that be. But it’s inevitable. Lastly, I’d have pulled a ‘While You Were Sleeping’ and had the lead end up with the sister. But that’s just me.