The latest X-Men film, “X-Men: Apocalypse,” isn’t the best X-men movie, but neither is it the worst. It does many things right, but somehow the whole seems less than the sum of its parts, and leaves the viewer feeling as though they’ve been entertained, but not fully satisfied. 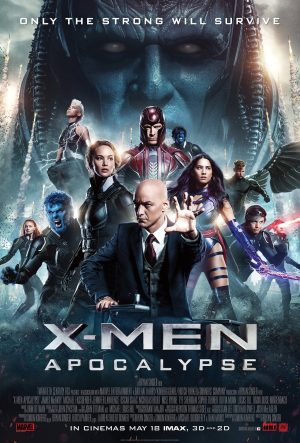 Director Bryan Singer introduced the world to the cinematic versions of Marvel’s mutant heroes back in 2000, with the critically and financially successful “X-Men.” He returned to direct the sequel “X2” in 2003, and again for “X-Men: Days of Future Past.” As these films are widely regarded as the best in the franchise, it was with great anticipation that fans awaited the appearance of the titular villain in Singer’s directorial hands. Unfortunately, the film – while visually striking and immense in scope – doesn’t fully deliver.

It doesn’t help that this is the third comic based movie this year to feature “good guys” fighting against one another – we’ve seen it in “Batman v. Superman: Dawn of Justice” and “Captain America: Civil War” (will we ever see a comic movie without a colon in it again?), and we see it again here. In this case, characters who have been X-men in the comics (and even in earlier movies) fight against characters who are or will be X-men, in an “all X-men X-travaganza.” While this isn’t necessarily bad, it is become a tired trope already.

Which leads us to another problem – the film spends a great deal of time showing us how En Sabah Nur recruits his Horsemen (Storm, Angel, Psylocke, and Magneto), but then gives them all (save Magneto) very little to do. Aside from bit parts in the final fight, the three non-Magneto Horsemen do nothing besides stand behind Apocalypse and try to look menacing. It is a waste of time in the film, and a waste of opportunity in having these characters actively contribute to the plot.

This can be understood, to some extent, however, because there are simply so many characters. With the X-men franchise seeming to change timelines with each new outing, new characters are introduced, old characters are reintroduced, new versions of old characters are re-reintroduced, and so on. It is confusing for someone who grew up with the comics and has seen all the films – I can only imagine what a casual viewer must be thinking. While the impulse to include every fans favorite character is understandable, it reaches a point where it detracts from the film as a whole. Olivia Munn’s Psylocke in particular is criminally underused, considering how big a part she has played in the marketing of the film to date.

This is not to say that “X-men: Apocalypse” is a bad film. It isn’t. The effects are well done, the characters are generally well cast, the acting is as good as can be expected in a comic book blockbuster. There are some stand-out moments as well – Quicksilver’s main scene, Kodi Smit-McPhee’s portrayal of young Nightcrawler, and many of the inside jokes and Marvel references are all very well done.

Apocalypse himself checks all the right boxes as the “big bad” of the movie – vague plans for destroying humanity, undefined but seemingly overwhelming power, crazy costume and blue skin – but he seemed a bit generic for such a major player in the comics. I do not agree with the common complaint that he was “too easy” to defeat (to describe why would be too much of a spoiler), but I would have liked to have seen more character development than the “humans are bad, and I’m going to kill them all so I can rule the world” routine that we have seen from so many uber-villains before. It is a major pitfall of these types of franchises that each instalment must raise the stakes over the previous one, and it sometimes (as here) fails to make the appropriate impact. Marvel has proven that “smaller” superhero movies can succeed (see: “Captain America: The Winter Soldier” for a prime example), and it would be interesting to see the X-Men go in a similar direction, rather than seeing them face global annihilation over and over again.

In the end, I left the theater feeling that I had seen a good superhero movie, complete with massive action sequences, cool costumes, some good one-liners, and a few interesting characters that I would like to see again. I hope that Mr. Singer and the rest of the crew running the X-Men franchise stop and step back for a moment, reduce the amount of characters, and focus on telling a great story rather than a great spectacle.