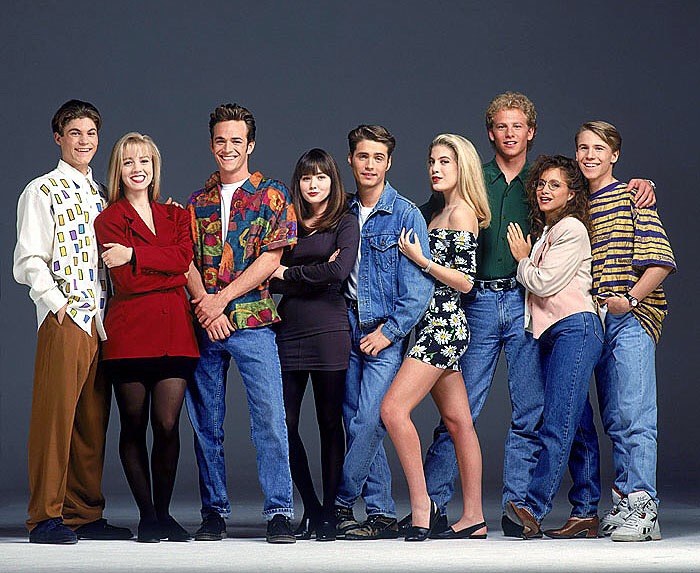 Hulu has kindly offered a Beverly Hills, 90210 deep-dive, and it has resulted in some serious googling of which I’m moderately ashamed. You can now share my shame with a lot of juicy gossip about a show that has solidified its place in history. Since its cast lived through the high-times of Hollywood, they were met with many perks that are no longer offered today, and a high level of tolerance for some unacceptable antics. Read below to learn more about our favorite alums of Beverly Hills High.

Shannon Doherty Was Fired For Her Haircut

It’s no secret that Shannon Doherty was let go from the series that launched her career, but most people don’t know the straw that broke the camel’s back. While Doherty was already in hot water for her on-set antics, she cut her hair without consulting producers, thereby disrupting the continuity. Her co-stars used the opportunity to confront Aaron Spelling, with Tori leading the pack. Because Doherty had allegedly introduced Tori Spelling to a man who physically abused her, Spelling agreed to their demand. Garth once detailed their feud in her memoir, saying that they were close to blows “when [Shannon] pulled up my skirt, and my bare a** was exposed for everyone on the set to see.” Garth then said, “Come on, b****! We’re taking this outside!’”

Everyone knows that Ray beat Donna, and the actor recently revealed that the role permanently tarnished his reputation. You see, 90210 was extremely popular at the time, and the audience had trouble separating the truth from reality. What people don’t know; however, is that Ray was originally supposed to get help and find redemption, but when the audience began to see Donna as “stupid” for staying with him, series creator/Tori Spelling’s father called for his termination. Walters went away with a cool million for the work he was supposed to perform, but his career never fully recovered.

One would think that Brian Austin Green’s behind-the-scenes romantic relationship with Tiffani Thiessen would make him happy about her hiring, but the actor wasn’t pleased with the idea of his fellow co-stars groping his girlfriend. The two dated for a few years and even lived together.

Gabrielle Carteris Was Asked Not to Get Pregnant (In Real Life)

Series star Gabrielle Carteris was notably older than the rest of the cast, so producers naturally assumed she might want to reproduce. This didn’t sit well, and they asked her to hold off. This is similar to the infamous Hunter Tylo story, which set a precedent for all women in the workplace when the soon-to-be Melrose Place actress sued Spelling Entertainment Group and Spelling Television Inc. for her claims of pregnancy discrimination, wrongful termination and breach of contract. She was awarded $5 million. According to Tylo, a producer said, “Why doesn’t she just go out and get an abortion? Then she can work.” Tylo strategically arrived in court each day wearing the sexiest of clothes at eight months pregnant, proving women everywhere can be sexy and pregnant at the same time. Unlike Tylo, Carteris’ pregnancy was written into the storyline, but her new life didn’t quite fit into the show’s theme.

The College Years Were Shot at the Occidental College in Glendale

Jennie Garth Called For an Actor’s Firing, and Aaron Spelling Made Up a Rumor to Justify It

Jennie Garth was widely respected, and the actress rarely asked for favors. So when she didn’t like her romantic lead, she personally asked Aaron Spelling to fire the guest star. Spelling knew the producers would object given their plans for his future on the series, so he allegedly made up a rumor that the actor was an anti-semite, and he had no choice but to fire him. The producers surmised that Spelling was trying to protect Garth, but it’s rumored that the actor never worked again.

Tori Spelling Had a Fling With Brian Austin and Jason Priestly

Tori Spelling revealed in an on-camera interview that she and Jason Priestley had some fun in the sun during one summer. When asked about the validity of her claim, Priestley simply said it was no one’s business. She also revealed that she and Brian Austin Green had a relationship.

Brandon Walsh and Emily Valentine Were a Thing — In Real Life

Jason Priestly had a long-lasting relationship with his co-star, Christine Elise. They dated for five years.

Though he felt his character had run its course, Priestley regrets leaving the show when he did. Only a fool leaves a show before its final season, he reasoned. Plus, he said that his departure hurt series creator Aaron Spelling’s feelings.His advice to other actors is, “No discussion: If you’re lucky enough to be on a hit TV show, don’t leave until they kill you off. You never know when, or if, the next one’s coming.”

Though the writers and producers often pitched Donna losing her virginity, Aaron Spelling wouldn’t have it. In fact, all the storyline pitch meetings with Aaron Spelling always began with his daughter’s role, even when she had minimal lines. He finally agreed during the latter part of the series, and Jason Priestly directed the episode.