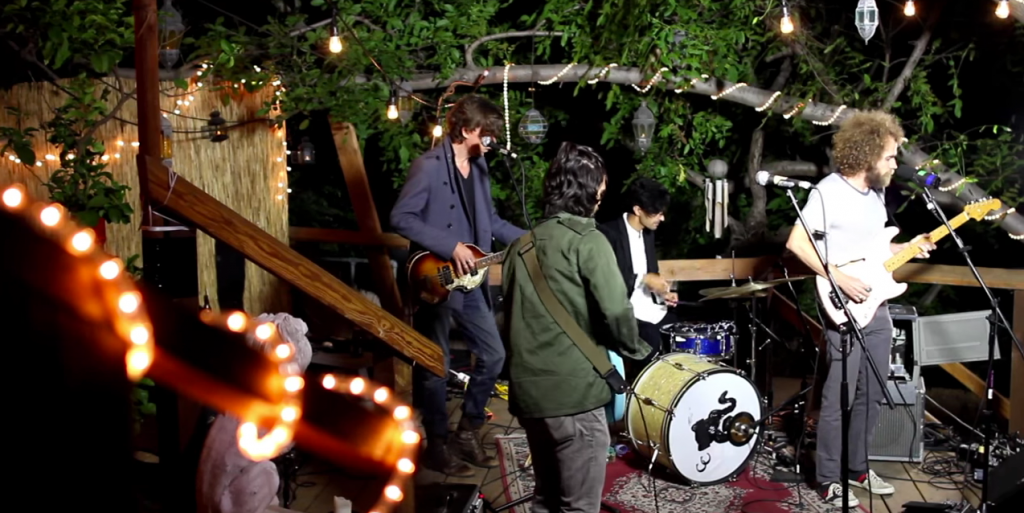 Los Angeles natives know there’s always a concert to see and a new venue to visit to scope out underground talent, but as an experienced Angelino, I can tell you that there’s no cooler concert with better live sound than the FIREPIT SESSIONS. Nestled in a secret enclave of Silverlake, and hosted by talented engineer and certified music influencer Adam Labov, the unique, two-day experience offers multiple back-to-back bands whose identity remains a secret until they hit the stage. Though perhaps I could have convinced Adam to reveal the names for “press” purposes, I trust his taste and love the surprise. It’s also impossible to guess because even rock bands take the stage, proving that Adam’s eclectic lineup is one-of-a-kind.

For more information, read my exclusive interview below with the man himself, Adam Labov.

I know you have extensive experience in the music industry. Tell me how you got started in this business.

Whether or not I realized it at the time, I think that it all began when I was 13 years old and saw my first real rock concert, Nirvana in 1993.  Even though I couldn’t hear properly for a few days afterward, I knew right away that live music was something I needed to always have in my life.  The energy I felt that night was unlike anything I had ever experienced before, and even after attending and mixing thousands of shows, it still continues for me.

In 1999, I took some audio engineer classes and created a home studio to hone my engineering skills.  When I moved to LA in 2003, I knew that many studios were having trouble making money, so I figured it was financially risky to open up another studio here.  I decided to try my luck with live sound and went to all the live music venues on the Sunset Strip and around town seeking work as a live engineer.  I got a call a month later to work at the Key Club and so it began….

When did you first come up with the idea for these Firepit Sessions?

It happened after hosting a huge house party one day in 2008 where I had 5 popular local bands play really loud sets, and the cops (and some neighbors) showed up multiple times.  I knew that if I wanted to continue having shows at my house, the format would have to be refined.

A month or so later, I asked my friend Travis Warren if he could bring his acoustic guitar over to perform an intimate, “unplugged” set for my birthday.  I invited about 30 friends over and it was an incredibly special time.  I’d like to think that night was the beginning of Firepit Sessions.

What is your ultimate goal for these sessions? I know it’s free, but do you anticipate having to charge for entry as it grows in popularity?

Making money from Firepit Sessions has never been a priority or even much of a thought and I’m never planning to charge an entrance fee. Money just complicates things and I’d rather it remain out of Firepit Sessions.

Firepit Sessions has become a passion project for me.  I love the idea of being able to host a party like this, where I curate every aspect of the entire weekend and then document it on the website.  It’s my way of trying to give back to the Los Angeles music community from which I’ve received so many incredible opportunities and positive experiences.

I want Firepit Sessions to be a safe haven for musicians to experiment with their craft, as well as provide a comfortable place for members of the audience to experience live music in a new light. Many local businesses have generously donated food, libations, and other services and I look forward to partnering with other like-minded people to help Firepit Sessions evolve. Given my erratic travel schedule, the event also serves as the perfect setting for me to see many of my friends at one time, and then introducing those friends to other like-minded people.  I love watching those connections being made and then eventually blossoming into other creative endeavors.

How do you choose the band that performs?

I’ve made a long and ever-growing list of bands I want to eventually perform at Firepit Sessions. Many are bands I already work with, or friends of friends.  I also have some bands that are likely too well known, but it keeps me motivated to try and make it happen.

Once I find an available weekend for Firepit Sessions, I go through the list and try my best to create a cohesive and diverse lineup based on who is available. I’m beyond grateful to all the musicians that have agreed to perform at Firepit Sessions, some multiple times; especially considering the fact they don’t get paid and I won’t let them publicly promote the shows before they happen.

This has gained a lot of popularity. Are you ever approached by an artist you have to turn down?

Given the infrequent nature of these concerts, only about 10 set times are available in any given year.   I’ve had to turn down bands mainly because I already had enough acts booked for that particular session. I try to schedule them for future Firepit Sessions if I think the vibe is right for what is happening over here.

I’ve seen rock bands perform in this rather intimate setting. Do you think it’s a challenge for them to transform their style?

My musical friends are talented and can easily adapt to the space and the unique audio challenges it presents.  The biggest issue is the 70+ steps to go up and down for load in/out.

When I first begin to pitch the idea of performing at Firepit Sessions to bands, I always reference “MTV unplugged”.  In particular, the episodes with Pearl Jam, Alice in Chains and Nirvana still remain as some of my favorite concerts because it forced those loud rock bands to become vulnerable by making them step outside their comfort zone to scale things back. It also provided the audience with a less amplified environment, which I believe made the listener feel more connected to the band and vice versa.  I find that’s when some of the best performances can happen, and certainly has become one of the ideas behind Firepit Sessions.

A great example of this is the band Fool’s Gold who was kind enough to perform on two separate occasions.  Their typical set up was full electric, but for FIrepit Sessions, they incorporated acoustic guitars, scaled back the drums, encouraged audience singing and even rearranged the songs. They turned out to be completely unique performances and totally exemplify the mood I’m going for.

That being said, I’ve upgraded the audio production over the years to be able to accommodate full band set ups and recently received a sponsorship from one of my favorite audio equipment companies.  At this point there really isn’t a situation that isn’t “doable”.