Skip to content
Take some time to caption the photo below. Apparently, things got heated at the Cannes Film Festival between The Dictator and Elisabetta Canalis, and she was thrown overboard in a body-bag. What do you think they were saying in that picture, and whatever it was — is that the motive for the murder? 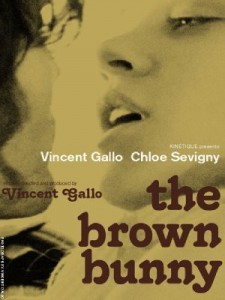 Chloe Sevigny’s recent Playboy interview drew my attention to a very old feud, which was just juicy enough to recount.  In 2003, Sevigny starred in The Brown Bunny, a movie written and directed by Vincent Gallo.  The film gained a lot of negative attention because Sevigny performed “unsimulated fellatio” on Gallo.  Translation?  She actually blew him — it wasn’t movie magic.   When the film debuted at the Cannes Film Festival, Roger Ebert said it was “the worst film in the history of Cannes.”  Gallo didn’t take his comment lightly, and began a very funny war of the words with the greatest wordsmith that ever lived.  Gallo called Ebert “a fat pig with the physique of a slave trader.”  Ebert then retorted with a play on Winston Churchill’s famous quote, saying, “It is true that I am fat, but one day I shall be thin, and he will still be the director of The Brown Bunny.”  Gallo, who still hadn’t learned his lesson, said he put a hex on Roger Ebert’s colon.  Ebert was unphased, saying, “a colonoscopy is more entertaining to watch than The Brown Bunny.”  The irony of this feud is that Gallo later re-edited the entire film, and Ebert ultimately gave it a thumbs up, claiming that he rescued it.  There’s still a lesson to be learned here, though — don’t mess with Roger Ebert.