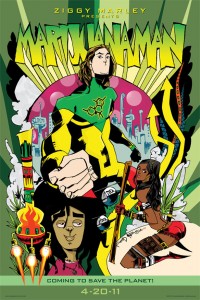 Have you ever sat in a room with a bunch of stoners and listened to them discuss their ideas about life? It’s almost as enjoyable as pulling my eyelashes out, lash by lash. Ziggy Marley has taken his deep thoughts to a new level, with the launch of his comic book, called Marijuanaman. Though the title speaks for itself, I’d like to quote the summary from Nerd Reactor: “[T]he story . . . is about an alien who is trying to help his home planet as they are in need of THC. He crash lands his bong spaceship on Earth and teams up with some freedom fighters aka potheads. Marijuanaman then goes on a mission to stop the destruction of our planet’s weed from an evil corporation that goes by the name of Pharma-Con. Marijuanaman must battle against Pharma-Con’s henchmen as well as a robotic-biker assassin called Cash Money.” And there you have it. You know what happens when there’s a famous person in your stoner-posse? — His book gets published.