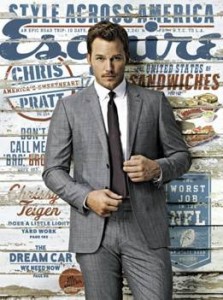 Chris Pratt covered the September issue of Esquire, and he revealed some secrets on meeting his wife, his Guardians of the Galaxy audition, and more. Read some choice quotes below, and visit ESQUIRE for more.

On his wife, Anna Faris, and how they met: When he goes to dinner with his wife, the actress Anna Faris, she always decides what they order. Pratt met Faris in 2007 on the set of Take Me Home Tonight, during the last sputters of her first marriage. She was hot and funny, but she wasn’t single, so there were no stakes. Why even bother trying to be the kind of guy she would date? When Faris came over to his apartment, he left porn magazines out. She didn’t mind. He detailed sexual encounters he had recently had as a single man in Los Angeles. She was into it. Into it into it? Into it into it. So when she called him to tell him that she had left her husband, Pratt decided he was going to marry her. He also decided he would be more like her, that he would study her and learn her sweet patience the way he’s learned to be a gentleman from his military friend.

His gun arsenal: Pratt talks about his thirty- or forty-gun arsenal. He bought Faris a gun in the event that crazy person comes to their house while he’s in Louisiana and necessitates her “blowing their fucking brains out.” He tells me to print that, just in case Anna Faris’ and Esquire’s fan demographics overlap. It’s not all so primal— Pratt believes in firearm regulation, background checks, and preventing guns from falling into the hands of the mentally ill. He explains population control and hunting licenses and tags and the virtues of eating what you kill. It all makes sense, but it also feels kind of like when Dexter explains that he’s a good serial killer because his victims are rapists and murderers. Really, this guy just likes to kill shit.

His GOTG and GI Joe audition: “When Guardians of the Galaxy was pitched to me, I said, “I don’t think so.” I just didn’t picture myself getting the role. I didn’t want to go and embarrass myself like I did when I auditioned for G.I. Joe a couple of years previously. I went in there, and halfway through I saw the director’s eyes just glaze over. It made sense—I was a little heavy and out of shape. I was not gonna play someone from G.I. Joe. I did not look like a G.I. Joe action figure come to life.