My history with Matchbox Twenty dates back to their inception. They’re an Orlando-based band that sent tongues wagging in their hometown prior to their massive success. If you’re from Florida like me and ran in certain circles, you’d likely now brag about finding them first. To be fair, my brother found them first and I went along for the ride, but that’s neither here nor there.

The group currently consists of Rob Thomas (lead vocals, rhythm guitar, keyboards), Kyle Cook (lead guitar, backing vocals), Brian Yale (bass), and Paul Doucette (rhythm guitar, drums, backing vocals). They began as Tabitha’s secret, which included Matchbox Twenty members Rob Thomas, Brian Yale, and Paul Doucette (who replaced Chris Smith) in addition to Jay Stanley and bassist John Goff. Creative and personal conflicts caused the end of Tabitha’s Secret and the subsequent ousting of Stanley and Goff, who later filed suit. They were replaced with Kyle Cook and Adam Gaynor, and Matchbox Twenty emerged. It’s been said that Goff and Stanley did not want to sign a deal with the production company of Atlantic Records rep Matt Serletic. But shortly after Matchbox Twenty and Serletic joined forces, the band had a seven-year deal with Atlantic Records. Their debut studio album, ‘Yourself or Someone Like You’ put them on the map.

Kyle Cook had previously exited Matchbox Twenty last year, saying there was a “deterioration of communication, disagreements on when, where and how we tour and a general break down of democracy within the group.” Cook reunited with his band-mates for the 2017 “A Brief History of Everything Tour”, and though it’s unclear why he finally came around, his other band, Rivers and Rust, served as the opening act. As for rhythm guitarist Adam Gaynor, he left the band in 2005, saying “I will no longer be a member of the band. I know most of you were confused if not slightly angered by this news. I wish there was some bright rainbow of an answer here … but there is not.” At the time, a “source” told Billboard “The band has decided not to renew his services.”

Rob Thomas previously teamed with Counting Crows for a very successful 2016 summer co-headline tour. It’s no secret that Thomas can fly solo, and I was fortunate enough to see his tour at The Greek with Counting Crows. He was excellent. In fact, I attended that show to cover Counting Crows, and I was delightfully pleased with the bonus of Thomas. That being said, now that I’ve seen him with his band-mates at The Forum, the magic is greatly multiplied. There’s something about performing with the guys he grew up with that takes Thomas up a notch. He’s got this earnest energy that makes you feel as if you’re seeing a band about to make it big, yet they’re so polished and professional, they can carry an arena with ease. I’ve seen a lot of our greatest artists perform without the band with which they got their break, and it’s simply never the same. I’ve seen Crosby without Stills, Nash and Young, Jennifer Nettles without Kristian Bush (Sugarland), and Jon Bon Jovi without Richie Sambora. It can be done, but should it? In fact, I’m a firm believer that discontent can fuel creativity, and though I know nothing of Thomas’ band dynamics, what I know is this — seeing Matchbox Twenty live is a true privilege. 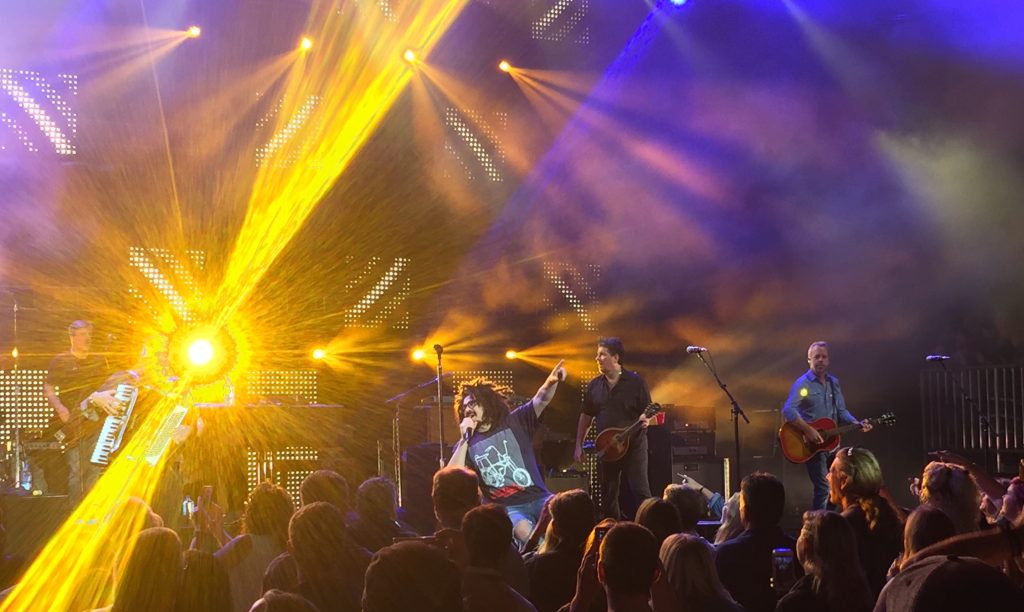