I fell in love with Monsters Calling Home almost immediately. I saw them perform at The Mint in Los Angeles, and I emailed lead singer Alex Hwang minutes after the show. Since then, I’ve shamelessly stalked them around Los Angeles, and then I took the stalking to the next level and invited Alex to Brick & Mortar Recording for an interview. He kindly complied. Listen below, and watch their new video, “Fight to Keep,” after the interview. 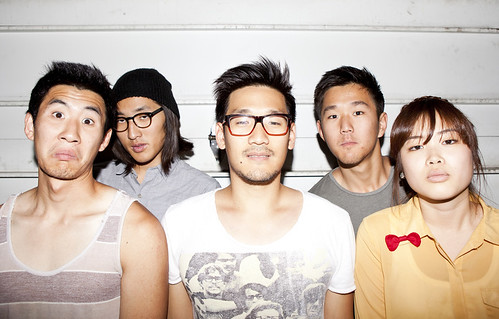 This band blew me away. I was rudely mid-conversation when they took the stage, and their music shut me up immediately. “Who are these guys?” I said to my friend. “Why aren’t they hugely famous? Why aren’t they selling out venues?” The group is called Monsters Calling Home, and it has six members, including Alex Hwang (lead vocals, guitar), Daniel Chae (Guitar, Violin, Bass, Keys), John Chong (Drums), Jennifer Rim (Violin), Sally Kang (Keys, Guitar), and Joe Chun (Bass, Guitar ). After doing some research, I found that they are “inspired by stories of immigrant families and the wildly appropriate 90s children TV show Aahh!!! Real Monsters.” The members met at their church and began playing local venues before performing together at the Kollaboration entertainment competition at the Nokia Theater, a competition that promotes Asian Pacific American talent. Considering their incredible stage presence, I was shocked to discover that they have only been together for six months. I’m told by their frontman Alex Hwang that before they release their first EP, they want to “get comfortable on stage, play the songs that we have to their best potential, create as much content for people to look for online and be good to our fans.” When he said that I scratched my head for a moment and thought, “you’re out of your mind if you think your stage presence needs to be more developed. You guys are ready. Get on it.” But his attitude is likely the reason they will be successful. Self-criticism can be very valuable. Watch their video for “Growing Up” below.

Monsters Calling Home – Growing Up from dchae on Vimeo.