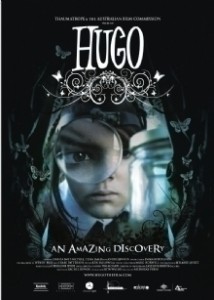 ‘Hugo’ might be the most personal film of Martin Scorcese’s career. Based on Brian Selznick’s children’s book, ‘The Invention of Hugo Cabret’, Scorcese shows his love for the history of cinema through the eyes of Hugo Cabret (Asa Butterfield).

Set in a dreamy version of 1930’s Paris, Cabret is an orphan who lives in a train station where he steals food and avoids the Station Inspector (Sacha Baron Cohen) who sends stray kids to an orphanage.

Cabret learned the art of clockmaking from his late father (Jude Law) and inherited his love of film. Hugo longs to finish restoring a relic left behind by his father, an automaton (a robot made of clock parts resembling a turn of the century version of C-3PO). The key to the restoration lies with another orphan, Isabelle (Chlöe Grace Moretz), and the couple she lives with (Ben Kingsley and Helen McCrory). Hugo introduces Isabelle to the magic of movies, and their quest ferries them through film history and the pioneering works of Georges Méliès.

Hugo is a film that doubles as an art exhibit, curated by Scorsese, who’s passion for cinema permeates this entire production. On display are works from a stellar cast and a list of Academy Award winners for cinematography, film editing, visual effects, music, costume design, all against the backdrop of the imaginative set designed by Dante Ferretti. At it’s core, Hugo is a touching tale with wounded characters searching for a purpose, and it will appeal to anyone passionate about the history of film.