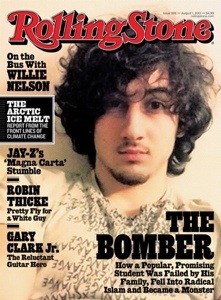 Rolling Stone should know better than this. Good journalism and morality are not mutually exclusive, and this crossed a definitive line. While it’s certainly true that America is obsessed with a killer’s mind in an attempt to understand the impetus for evil, there’s a way to write an article that doesn’t include blasting a killer’s face on the cover a magazine as if he’s some kind of rock star. And furthermore, the picture in question is flattering, and for a murderer — couldn’t they pick another?

I imagine a bunch of executives in a room debating about whether to use this image, fully anticipating the backlash, and doing it anyways. Shock value sells magazines — so why not?