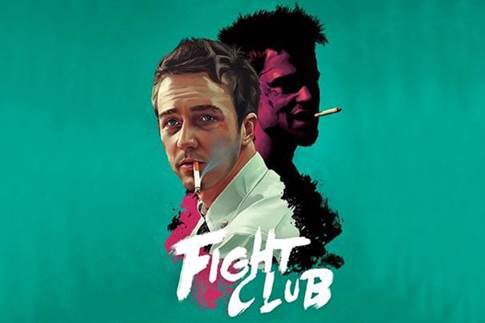 Los Angeles is filled with inventive ideas — some work and some don’t, but I’ll never take the city for granted with its exponential offerings of new experiences. One such experience was ‘Fight Club’ at The Wiltern. The unconventional movie night featured the famed cult classic on a big-screen projector that was displayed just above a live band who played the film’s original score as it aired. The live musical score accompanying the film was performed by Hollywood multi-instrumentalist Angel Roche (Dave Navarro and Ziggy Marley), Eric Klerks on guitar and bass (Grandmothers Of Invention), Damon Ramirez on the synths (Fungo Mungo, Looner), and film composer, Zoë Poledouris-Roche (composer: Conan The Barbarian, Bully).

I went into this experience with a positive attitude, a great amount of excitement, and the embarrassing admission that I’ve never seen ‘Fight Club’ in full. Also, as a lover of all things music, this seemed like a can’t-miss idea. But sometimes ideas are better than its execution, and this is one of those times. For starters, ‘Fight Club,’ though a cult classic that would no-doubt draw a large audience, doesn’t have a substantial amount of music. When the music began, I found myself extremely excited, which means with a different film, this would have worked. Furthermore, the on-stage “acrobatics” as it was marketed, was disjointed and distracting. Acting out scenes as they air just felt odd, and I’d have rather seen a small spotlight on the band as they played instead. It’s also worth noting that since the audience was unaware of exactly what would happen on stage, it’s just not smart to have people running through the crowd yelling things as fights are heard on screen. Translation? — I thought, for just one millisecond, that we might be in the midst of a terrorist attack. I checked in with my surroundings to see if I was the only person with this thought, and I noticed that the energy of the room shifted as others also looked around in fright. It’s possible I’m reading into it, but I pride myself on feeling the energy of a crowd when judging what I see, and I think I’m right here. Though sad and unfortunate, this just can’t happen in a live-theater experience anymore. There are ways to do it, but this wasn’t it.

If I were planning the next event, I’d encourage a film with more music, spotlight the band with a dim light, and introduce the experience with more clarity. Lastly, I’d have more food available for purchase. A for intention, though.