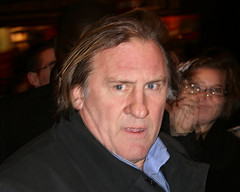 There have been moments in my life where I’ve used my words to annihilate ridiculous people. And it’s during those verbal brawls that I often think, “can’t I just punch you in the face instead? Wouldn’t that be easier? Surely this schmuck will understand his idiocy if I beat him up.” Don’t worry kids — I’m not suggesting violence is the answer — but I am suggesting it’s crossed my mind from time to time. One such individual who found an alternative to violence is Mr. Gerard Depardieu, who urinated in the aisle of an airplane after the stewardess forbade him from using the locked restroom while the plane “ascended to cruising altitude.” The stewardess has been described as “dumbfounded,” and I can’t think of a more laughable term. Hats off to Gerard for finding a happy medium between words and violence. Who knew it existed?