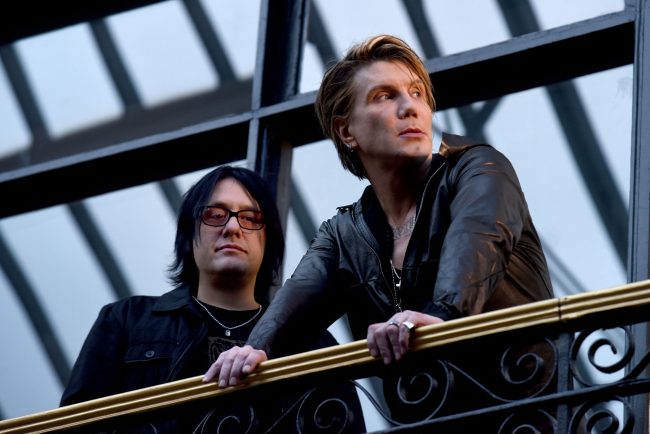 If Malcolm Gladwell’s 10,000 Hour Rule applies to anyone, it’s the Goo Goo Dolls. The Buffalo bred band began their music career nearly a decade before their breakout success with “Name” in 1995 on A Boy Named Goo, which was their fifth studio album. But that was just the beginning. They’d follow it up three years later with Dizzy Up the Girl, which featured “Slide,” Black Balloon,” “Dizzy,” and “Broadway.” And who can forget the heart-tugging “Iris,” off the City of Angels soundtrack, which was ranked #1 on Billboard’s “Top 100 Pop Songs 1992–2012” chart. The multi-platinum, Grammy-nominated band includes founders John Rzeznik (lead singer, guitarist) and Robby Takac (vocalist, bassist), who have garnered an impressive 14 top ten radio hits and 12 million album sales. I had the pleasure of catching them on tour at The Greek for their latest EP release, You Should Be Happy, and it’s my first time seeing the band live. Those in my inner circle are aware that nearly all my free time is spent attending the concerts of earnest up-and-comers, but every so often a girl wants to go to The Greek to celebrate a seasoned act. And the Goo Goo Dolls delivered. In fact, they far exceeded my expectations. Rzeznik’s interaction with the audience creates an intimate, small-venue vibe, which is hard to do at the illustrious Greek. As for Robby Takac, he has a rare raw energy which could fool you into thinking this is the first time they’ve played these songs live. They’re grateful to their devoted fans, and it shows. I was fortunate enough to pick the brain of Robby Takac, whose colorful career extends beyond the Goo Goo Dolls with his own label, festival, and more. Read below to learn the secrets of The Goo Goo Dolls’ success and longevity.

In researching your band, I discovered that you were hustling for a decade before your breakout success.

Do you know the exact turning point? Was there some sort of creative shift?

I think we got to live out a decade in public that most bands get to live in their basement. In that time, we learned how to play, we learned how to sing better, and we learned a little bit more about album making and the music industry. The stars lined up, and we had a hit record.

I also read that you had a less than stellar experience with your label at the time.

We were signed to a label that I won’t give the press to right now. It was two labels, actually, before we signed to Warner Bros. Records. I’m the sort of person, personally, who looks at every experience as leading you to where you are today, and we’re in a really great place today. I don’t think I would’ve changed any of that history, honestly.

When you look back at that 10 years before you broke out, was there a period where you thought this just isn’t going to happen and maybe I should shift my career?

I don’t think I ever really thought that. I think it crossed John [Rzeznik]’s mind a bunch of times, but I’m always the guy that’s trying to pull everybody back in the van again for 10 years. It was just persistence. We got lucky and things happened for us right at a time where most bands don’t make it 10 years.

[In that time], we felt marginally successful because our first record sold 6,500 copies, our second record sold 30,000 copies, and our fourth record sold 100,000 copies. We were making progress. But right around our third record is when bands like us all of a sudden started getting real record deals. Our heroes were selling 30,000 copies.

Do you think it was also a sign of the times?

Absolutely. Every hit record is a sign of the times. It’s a reflection of what is allowed to happen in popular culture at that particular moment.

You’re making really good new  music. Do you ever get sick of playing the hits?

John jokes about that sometimes during the shows. He’ll say, “Please don’t run for a beer right now. We’re about to do a new song.” What I’ve found is we used to put out a new record and there was a long process for people to get to those songs. They had to get to the store, buy it, unwrap it, get to their house, put it into their stereo, listen to it a few times, maybe make a tape, put it in their car, etc . . .  Now, they just have to say, “Hey, phone. Play the new Goo Goo Dolls record.” New music is literally at the end of their arm. When people come [to the show], they know [the new songs] because of that ease of access. There’s all this talk about death of the music industry, all that kind of stuff. People have more of a connection to music than they ever had. It’s modernization and rebirth.

The same great talent still rises to the top. Music might be more accessible, but the standouts are a very small number. You might get YouTube hits, but very few people can fill The Greek. Do you agree?

I absolutely do. Cream always rises to the top. It doesn’t always become huge, but it always rises to the top. But when you remove the physicality from music, it becomes less of a part of your life. It becomes data. When I was a kid, I went through my record collection in my room. Those records — Deep Purple’s Made in Japan — are part of my life, man. When you remove that physicality, it removed a bit of the mysticism. This weird physical connection to the music is gone. We just released our first five albums on vinyl, for the first time. The plan is to release the next six on vinyl.

Speaking of record sales, everyone says musicians need to tour longer because people are buying less records. Do you find that?

We’ve always toured a lot, but we never have those entire years off anymore. We used to take a whole year off and rehire a crew after a year, and we’d spend that year making a record. We don’t do that anymore. I think our crew has been on staff now for the past six years. [Bands] play more now, but I think that’s how you get great.

Do you like the business element behind the music? Do you ever think, “I just want to play music, and I don’t want to do all the other stuff that goes along with it?”

It’s probably different for us. I’ve had the same manager for almost 27 years now, the same record label for 22, and the same booking agent for 20 years. They’re all like family so things are a lot different for us than they are for a lot of bands.

Many bands argue and break up and get back together constantly. Does it say something about your specific personality that you have been able to sustain those connections for decades?

It’s not about any one person’s particular temperament. Everybody in this organization has been a complete a-hole at one point or another, but it’s about knowing who ultimately has your back. Most of [our team] have proven themselves and those who haven’t have weeded themselves out along the way. Sometimes it’s sad when that happens, and sometimes it’s a joy.

A lot of our successful peers went away for a while to be actors or do solo projects. Nostalgia has come around and it’s valuable to put their band back together and make money. That’s not what we did. We have the distinct advantage of having worked at this that entire time and, hopefully, gotten better.

Can you take me quickly through how you and John met?

I played in a band with our first drummer, George [Tutuska], and I also played in a band with my cousin who played with Johnny. Johnny was in that band, too. John and I just got to be friends and got an apartment together and decided that we were going to take over the world with our amps, guitars and a lot of hairspray. We started playing around the country. We’ve been friends ever since.

How did you decide to swap the lead vocals? I know you started as the lead singer.

We’d audition lead singers constantly and never found anybody. We had a studio so I just started singing. John sang one or two songs and then it became the opposite. John started finding his own voice. It’s pretty amazing what happens when you actually let something find its own course.

How do you determine which of your songs land on the record?

I usually bring in five or six songs. When we listen to those, it becomes pretty obvious which ones we’re going to start working on for the record. John will then have a few ideas that he’s been putting together with a producer on that song. We work on them one by one.

Are you precious about your material?

It’s an uncomfortable mixture of being precious and knowing what we want. I understand the value of someone else’s expertise and ideas. That comes with growing up. When we were kids, it was a fight with every single producer. We would argue as if they were the camp counselor or the teacher. That can happen now in the course of being creative, but I don’t think [it’s the same].

Tell me about your record label, Good Charamel Records.

I started by signing a few bands in Buffalo that I really liked. I quickly found out that if you want to make enemies in your hometown you start a record label and sign bands. It’s just hard. There’s so many bands [that say], “Why not me?” Because my band was successful, the expectations were high. I was ready to shut my label down after about five years.

One of my bands, The Juliet Dagger, went to Japan and worked with a band called Shonen Knife who I had been a fan of for my whole life. They’d been together longer than my band. As I was about to close the label, Shonen Knife called me up and said, “Hey, what do you think about doing a record for us?” I couldn’t say no. I then signed a couple other bands from Japan. It’s been fun. There’s a band over here right now, actually, called Pinky Doodle Poodle that’s on tour. I’ve worked with Pinky Doodle Poodle and Shonen Knife directly in the studio. I’ve also produced records for The Molice.

You also founded the Music is Art Festival.

We started it 15 years ago with just one stage and 10 artists. Now it’s 125 displaying artists and 15 stages.

Are you very hands on with the creative process?

I do it all, and I have a great staff of people that work for the organization in Buffalo. We do camps for kids and we do Battle of the Bands for adults. This festival has become sort of the flagship. It’s pretty great.

For more information on Goo Goo Dolls and their current release, click HERE. Listen to “Use Me” below, which can be found on You Should Be Happy.