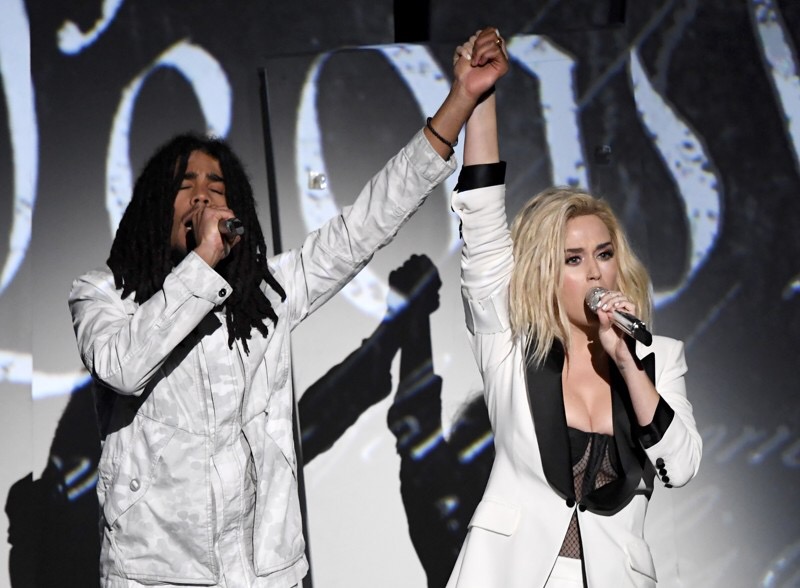 To quote a personal friend about this year’s Grammys, “There’s so much amazing music out there. The Grammys are idiotic in general. Imagine how terrible the Oscars would be if it was always the two highest grossing films battling for best film.” It’s no secret that this party is run by old, white men, and the performances and awards reflect that lack of imagination. After all, if you’re going to a music show, you better burn the house down, and that’s not what happened. Read below for my individual critiques.

As the only artist nominated for Album of the Year who actually wrote his entire album ALONE, Sturgill Simpson deserves special recognition. The country music outlaw also gets special cred for breaking into a category dominated by the typical pop-music stars, including Beyonce, Drake, Justin Bieber, and Adele. He has never compromised his integrity for fame, and he therefore deserved that Best Country Album win for ‘A Sailor’s Guide to Earth.’ Too bad they didn’t televise his award.

For a pop star that does not dance, Katy Perry’s capability will always be behind her cohorts,which makes her performance at the Grammys surprisingly good. This is the best she’s looked and she seemed extremely comfortable on stage. As for her new song, “Chained to the Rhythm,” it’s repetitive, unoriginal, and moderately grating, and the message is a tad ridiculous. We need to stand for something, remove our rose-colored glasses, but ALSO party? I’m confused. Watch below.

I get that she’s pregnant, but Beyonce’s seated deity-style performance felt more like a painting than an actual song. Did she take that “Queen Bey” thing literally? This is a MUSIC show, and every move she’s made since announcing her pregnancy feels indulgent (see pregnancy pics), especially given the current state of affairs. Watch below.

Beyonce performing Sandcastles at the #GRAMMYs is probably the most beautiful thing i’ve ever seen pic.twitter.com/dSXtAYKqfz

After an off-key start that is being attributed to the same technical difficulties that marred other performers that night, Adele proved her prowess by stopping the tune and asking for a do-over. She solidified her authenticity, stayed true to her claim that she would never again relive last year’s debacle, and showed Mariah a thing or two about how to climb out of a sticky on-stage mess. Plus, she swore, which is always fun. Having said all that, I HATED the arrangement of George Michael’s “Fastlove.” It’s so boring I almost fell asleep. Watch below.

I’m going to come down hard on Gaga for her handling of the technical problems during her performance with Metallica. When the lead singer’s mic went out, she should have immediately walked over to him with her own mic. She spent three verses on her side of the stage, until James Hetfield finally walked over to share her mic. At that point, she still hogged it, and she did not even tilt it in his direction. To quote my friend, “If you’re not giving light, you’re taking it.” As for the Grammys, there’s no excuse that mic went out. I understand a technical difficulty here and there, but there were FAR TOO MANY. Furthermore, I resent Gaga’s presence at all. Metallica does’t need an assist from a pop-star, and adding glitter to a rock G-D to keep people entertained is an insulting use of their stage time. I love Gaga, but I don’t need a side of shiny with my grits.