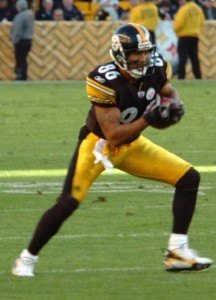 While catching up on last week’s ‘Dancing With the Stars,’ I thought to myself, “gee, that Hines Ward is such a cuddly teddy bear.  In fact, I just want to hug him and pinch his cheeks.”  Since I don’t know much about him, I decided to do some research.  Turns out, he’s not so cuddly after all.  Two years ago, Ward’s peers voted him the “dirtiest player” in the NFL.  Apparently, he broke the jaw of Bengals’ Keith Rivers, with a “surprise downfield block.” I put that line from Sports Illustrated in quotations, because I have absolutely no idea what it means, so I’m unable to paraphrase.  And in case that annoys you, please make a personal phone call to my father, whose sibling favoritism resulted in my brother’s attendance at every football game.   But enough about me.  Anyways, Ward responded to the criticism by saying, “when I go across the middle, those guys aren’t going to tackle me softly and lay me down to the ground. That’s not football. I find it ironic that now you see a receiver delivering blows, and it’s an issue. But I haven’t changed. I’ve been doing it this way for 11 years.”  Again, I have no idea what “going across the middle” means, but it sounds serious.  Authentic teddy bears are hard to find, I suppose.