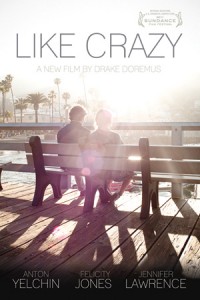 Love is necessary but not sufficient for a relationship to survive. And that painful realization is beautifully illustrated in ‘Like Crazy.’ The film follows Anna (Felicity Jones), a British exchange student studying in Los Angeles, who falls in love with Jacob (Anton Yelchin). She overstays her visa to spend the summer with Jacob after graduation, which later results in a ban from the United States. Their attempt at a long distance relationship becomes the center of the film, and no matter how hard they fight against it, their love keeps them intertwined. The film presents some haunting questions about love. Should it be that hard? Should it cause that much pain? Is it worth fighting through the obstacles that shackle your happiness? And if it is truly love, and the obstacles are removed, does that automatically equate to a sustainable relationship? I won’t reveal how this movie ends, but I will say that it’s the most accurate portrayal of love I’ve ever seen on film.