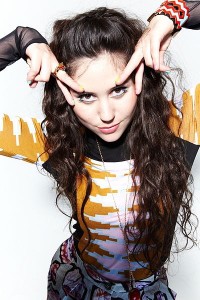 I first heard of Eliza Doolittle while researching the musicians who performed at South by Southwest.  When I listened to Pack Up, I immediately noticed the resemblance to Lily Allen.  I then googled Eliza Doolittle, and I’m apparently not the only person who noticed.  Eliza has addressed the comments directly, saying, “It annoys me quite a bit. I do think our music is very different and we are different people.”  Since Lily Allen entered the music scene first, I was curious if she was also annoyed by the comparison.  Specifically, does Lily think Eliza ripped her off?  The short answer is yes.  Lily said, “I’m feeling for Eliza Doolittle, it seems she’s sick of being compared to me all the time.  Then again, maybe if she’d gone in a different direction with her artwork and wasn’t riding around in a chopper in her new video . . . ”  After researching the album covers in question, it’s abundantly clear that Eliza Doolittle’s self-titled debut album bears a striking resemblance to Lily Allen’s Alright, Still album cover.  Since music producer George Kurstin worked on both their albums, this isn’t too surprising.  It is; however, surprising that Eliza Doolittle wouldn’t acknowledge the overlap.  Listen to a song by both artists below, and judge for yourself.