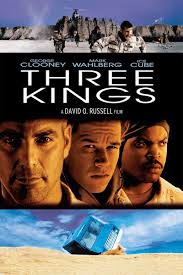 It’s no secret that Playboy has the best interviews in history, and as a tribute to the revolutionary magazine, I’ve decided to share an anecdote from a George Clooney interview, because it confirms what a great guy he is.  Clooney revealed his on set war with director David O. Russell while shooting the 1999 film, Three Kings.  Clooney said Russell yelled at everyone on the set, including a camera car driver.  Clooney confronted Russell, saying, “You can yell and scream and even fire him, but what you can’t do is humiliate him in front of people. Not on my set, if I have any say about it.”  Russell then screamed at a second assistant director, who quit on the spot.  Clooney addressed him again, saying, “you can’t shove, push or humiliate people who aren’t allowed to defend themselves.”  Russell responded to Clooney’s criticism by challenging him to a fist fight, and the two men came to blows.  Clooney “had him by the throat,” confessing that he was “going to kill him.”  Though they finally finished the movie, Clooney said it was “without exception, the worst experience of [his] life.”  My favorite part of this story is the idea that George Clooney stuck up for the little guy at the very beginning of his career before he really became the star he is today.  It’s no secret that directors can be demeaning assholes, but it’s up to the power players to put a stop to it.  To add to this story, Lily Tomlin later worked with David O. Russell on I Heart Huckabees, and a tape was released of a fight between Russell and Tomlin.  Many accused Clooney of circulating the tape, which he later denied.  Watch below to see Russell lose it half-way in.