McConaughey visited Watch What Happens Live to promote his new memoir, Greenlights, and when a fan asked him about Jennifer Aniston and Brad Pitt’s sexual chemistry during the Fast Times at Ridgemont High table read, he answered the question directly— avoiding the typical worm-your-way-out-of-uncomfortable questions approach so often utilized by celebrities.

McConaughey had some fun with it but admitted he didn’t notice the hot tension. He was also asked about Shia LaBeouf’s very funny, in-character hot boxing of his car to emulate Spicoli, and he admitted something interesting. While Shia’s performance was quite enjoyable for all of us, the end result was edited down and Shia might have been more annoyingly in character than we originally suspected (I’d like to see the uncut version).

It is difficult to articulate how Matthew McConaughey can live in a different world and be so down-to-earth at the same time, but he definitely achieves it.

There are two very important people in Mathew McConaughey’s life. The first is God, and the second is Mathew McConaughey. McConaughey received the Oscar for Best Actor and explained how he’s constantly inspired by himself (ten years from now, of course). To be fair, the southern gentleman also thanked his family, but he simply couldn’t resist something ridiculous. Watch below to see McConaughey discuss how he’s his own hero. 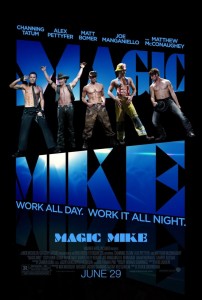 The best part of this film is Matthew McConaughey’s hilarious strip-club-hosting antics, and the second best part is Channing Tatum’s ass. Other than that, it’s just a plot-less guilty pleasure. The film follows “Magic Mike,” a guy with a dream to start his own business building custom furniture, who strips on the side to raise the money. He meets Adam (Alex Pettyfer) during a random construction job, and he convinces the troubled, aimless kid to join him later at his strip club. Strip club owner Dallas (Matthew McConaughey) thinks Adam’s “got something” and he hires him to strip. When Adam gets into trouble, his sister Brooke (Cody Horn) blames Mike, and Mike’s crush on Brooke leads him to a painful monologue about how he’s “more than Magic Mike.” There were many moments of this film when I found myself turning to my friend to ask, “When will they get back to the stripping?” and “Where is Matthew McConaughey?” I actually felt bad for Channing Tatum, whose acting skills were severely put to the test given that he had absolutely no foil to work with. In fact, the aforementioned “painful monologue” felt like a Channing Tatum’s screen-test, because Cody Horn looked as if she was too tired to actually act. Perhaps she was holding script pages instead of listening? As for Alex Pettyfer, he too could use some acting lessons. To be fair, it’s possible that the director (who I was shocked to discover is Steven Soderbergh) told his actors to “play it boring.” But the most disappointing element of the film wasn’t the actors, it was the limited amount of choreographed dancing. If you’re going cheap on the plot, then you better amp up the dancing. And three sequences is just not enough. That being said, get some popcorn and go see it. It’s not every day you see A-listers wearing next-to-nothing.