Skip to content
Much like her character on ‘Desperate Housewives,’ Nicollette Sheridan will not go down without a fight. The leading lady was ousted from the hit ABC show and shortly thereafter, she alleged it was a retaliatory response to her complaints 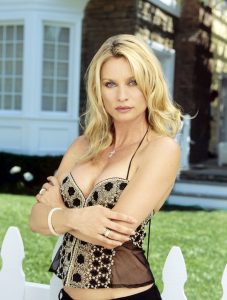 against series creator Marc Cherry, who she says slapped her during an argument over the script. Though I have zero knowledge of fault in this matter, it’s especially interesting that ABC/Touchstone won’t settle to save face. Perhaps they don’t want to set a precedent. Here’s a legal timeline of the Tinseltown tiff.

Sheridan alleged to have “quit” the show, but her unkind words in the press were perhaps a precursor of things to come. Sheridan said, “When the show started it was such a different beast. It was exciting and dangerous and funny and edgy and bizarre. It started feeling a little complacent, and that was very frustrating.” Marc Cherry responded in kind, saying, “Edie’s already slept with most of the guys on the street and has caused about as many problems as she could.” He also said his decision was largely due to the network’s pressure to cut costs.

Sheridan sues Marc Cherry, the series creator of ‘Desperate Housewives,’ alleging battery, gender violence, wrongful termination, and “intentional infliction of emotional distress.”According to Sheridan, she questioned Cherry about his script, and he slapped her in a fit of rage. She reported his actions to ABC and she was fired in retaliation. ABC Studios responded, saying, “While we have yet to see the actual complaint, we investigated similar claims made by Ms. Sheridan last year and found them to be without merit.”

Marc Cherry was released from the case after the battery charge was dropped. According to the Judge, “the battery claim did not meet the standards of workman’s compensation statutes that apply to these matters.”

A jury of 12 could not reach a verdict, and after an 8-4 deadlock with no settlement in sight, the Judge declared a mistrial. The jury foreman told the court that the 8-4 split was in Sheridan’s favor.

LA Superior Judge Michael Stern sided with ABC/Touchstone TV and granted a summary judgment dismissing Sheridan’s attempt for a new trial. He ruled based on Sheridan not filing a complaint with the California Labor Commission within six months of the September 2008 incident.

An LA Superior Court Judge decided that Sheridan can get a new trial. An Amendment to the rules in 2013 helped her case, most notably when an appeals court stated, “there is no requirement that an individual exhaust administrative remedies or procedures.”

James Denton appeared on The View to discuss his character’s demise on Desperate Housewives, and he surprisingly mentioned Nicollette Sheridan’s lawsuit against series creator Marc Cherry. In fact, he even made fun of it, saying, “He slapped me!” as a joke in reference to Marc Cherry. He also discussed a story he wasn’t allowed to tell during trial because of the opposing counsel’s objection. Without getting into the very complicated rules of evidence that took me years to fully understand in law school, let me just say that it’s not surprising that the judge ruled in favor of excluding his story. Furthermore, because Denton wasn’t present in Nicollette’s trailer when she alleges Marc Cherry slapped her, I find it in poor taste for him to take a side. And despite his proclamation otherwise — trust me — he’s taken a side.