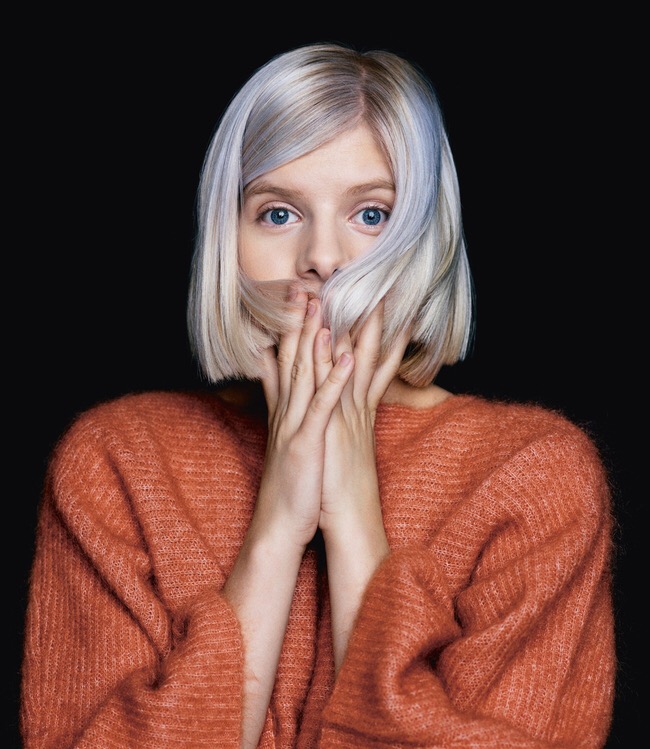 At just 19 years old, Aurora Aksnes is making waves in the music industry, and it’s just a matter of time before the unforgettable Norwegian singer’s synth-pop portfolio conquers the cross-continent charts, and the entire planet is singing her tunes. Now known only by her first name, AURORA began playing piano at age six due to an attraction to classical music’s emotional, relaxed undertones. She started to write original songs as early as age nine, but she only chose to share her music with the world when her mother suggested that her gift could help others process their own emotional journey. Despite initial fears of performing in public, she sang at her high school, which peaked her now-manager’s interest after a fellow student uploaded her performance online. Her subsequent ascent has been swift, daunting, and perhaps a tad overwhelming for the singer who once claimed to relish in solitude. But her climb is coupled with a slow comfort, and as the public becomes more aware of her prowess, she is ever-the-more fearless, and it shows.

I had the pleasure of watching AURORA perform for a sold-out crowd at The Troubadour, and I’ll be talking about it for years to come. Her on-stage oddities are refreshing, with a quirky amalgam of authenticity, fun, and a bit of endearing discomfort. And given today’s penchant for over-produced auto-tuning and her stunning album vocals, it shocked me to discover her live vocals are on par, if not superior to her recording. It’s clear she’s been polishing her craft for much of her life, because her youthful exuberance is met with what I perceive to be a polished, shrewd performer who is clear about the direction of her career. According to AURORA, “there’s something inside her that needs to make music and to play the music she makes.” For that, we should all feel lucky. Read my interview with singer/songwriter below.

You’ve mentioned that songwriting provides an emotional release. When you sing a song written from a place of pain or sadness, is it difficult to sing it again each time you perform because you relive that emotion?

I’ve never found that to be difficult. Reminders of pain can be difficult if you haven’t spent enough time processing what happened when you needed it the most! When I write, it helps me to accept, understand and sometimes move on from pain. And singing songs about darker times makes me both sad and happy! I like to remember, and I like to cry.

I know you wrote “Runaway” at a very young age, which is incredibly impressive. When you listen to “Runaway” now in relation to your more recent songs, how do you feel your sound has evolved?

My sound will evolve and change as I change! As I grow, I learn more about producing and how to get my sound just right. I also learn to listen more to my own opinions. There are many voices around me, and I’m learning to not listen to them too much. I can always learn, but it’s important to go with what your belly tells you to do once in a while.

Is it scary to share such deeply personal music with others? I would imagine it feels as if someone is reading your journal.

I don’t find it scary. I’m definitely not the only one who have felt the things that I’ve felt through my life. What is personal, is also at many occasions not special. It’s important to share your experiences and feeling with people around you. We all have them, it’s perfectly normal.

You’ve mentioned how much you enjoy the solitude of songwriting. How are you coping with the attention that comes along with fame?

I’m not a fan of attention. My listeners seem to be very lovely people that love my music, but I don’t think I like the idea of having fans either. It’s strange being someone to so many people. You loose your freedom the minute everyone wants a piece of you. But I love people who appreciate what I do. I just don’t like the limelight.

Because you were signed at such a young age, did anyone try to change your sound or influence your art in a way that you did not expect?

I don’t think people try deliberately to change me just to be mean! But people have different opinions, and everyone just wants me to succeed. And to get listed on radios. I find it hard but also…educational to try to make so many people happy – at the same time as I’m happy. And sometimes I win the battles and sometimes I lose. I know that’s how it is, but still it’s very difficult. Many things would have been different if I was the only one to decide. For me music is not about business, and it never will be! I think I would tell the younger me to slow a bit down, and wait if I could go back in time. But I am also happy to be where I am now.

Is it possible to take me a little bit inside your songwriting process? Do you start with the lyrics or the melody, for example?

It usually starts with a lyric line, or a melody line that makes me jump up and run to the piano and start making that idea into a whole song. Those small lightnings sometimes appear in dreams, and sometimes when I see something peculiar, or sad or lovely. Everything is quite inspiring when you’re in an inspiring mood.

Have you ever been surprised by which songs the audience responds the most to when you perform live?

No, people are quite predictable. We create magic moments together as well. If people are paying attention and the light is right, I can feel tension and energy fill the room, which makes me perform with so much energy that I almost explode. Then they react to it with great energy afterwords. You get back what you give, and when the audience is great, it’s inspiring for me and my band as well.

What instrument do you use to write your music with?

Mostly piano and sometimes guitar if I want to write outside. I’m learning how to play a harp now, so maybe I’ll write more on harp in the future.

You’ve said your mother encouraged you to share your work with the world. How does she feel about your current success?

Well, she wants me to be happy and follow my dreams. This is all getting much bigger than we thought it would get, so she’s worried and thrilled at the same time for obvious reasons I think!

Do you have a favorite country you’ve performed in?

It’s more about the room and the energy of the people than the country. Countries don’t really define the people that live in them. Everywhere people are very lovely and give a lot of energy back to us!

Your rendition of David Bowie’s “Life on Mars” is absolutely stunning. Was there something about that song that spoke to you specifically?

Thank you so much!!! I’ve loved that song for a long time. I love looking at the sky at night time, and where I live you can see the stars very clearly when it’s dark. And I understand the need to escape this world, and the question about a greater more pure life somewhere out there. A more fantastic place. Like, Is there a life on Mars.

You can purchase AURORA’s debut album, ‘All My Demons Greeting Me As a Friend’ HERE. When you begin to listen, you’ll discover that the title personifies the entire album, which beautifully blends both light and shade, wavering between “Broken mornings, broken nights and broken days in between” and “feel[ing] the light for the very first time.” Watch some performances below.