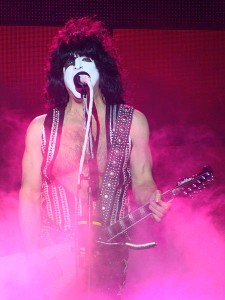 “We were a little more traditional and stuck with names our children hopefully won’t regret when they grow up. Your kids aren’t objects for amusement, so why would you give them a name that would subject them to possible ridicule at school? Kids can be pretty tough on each other, and who wants to put a child named Spaghetti through school?” Paul Stanley on why he named his newborn Emily instead of adhering to the current celebrity trend of wacky baby names.