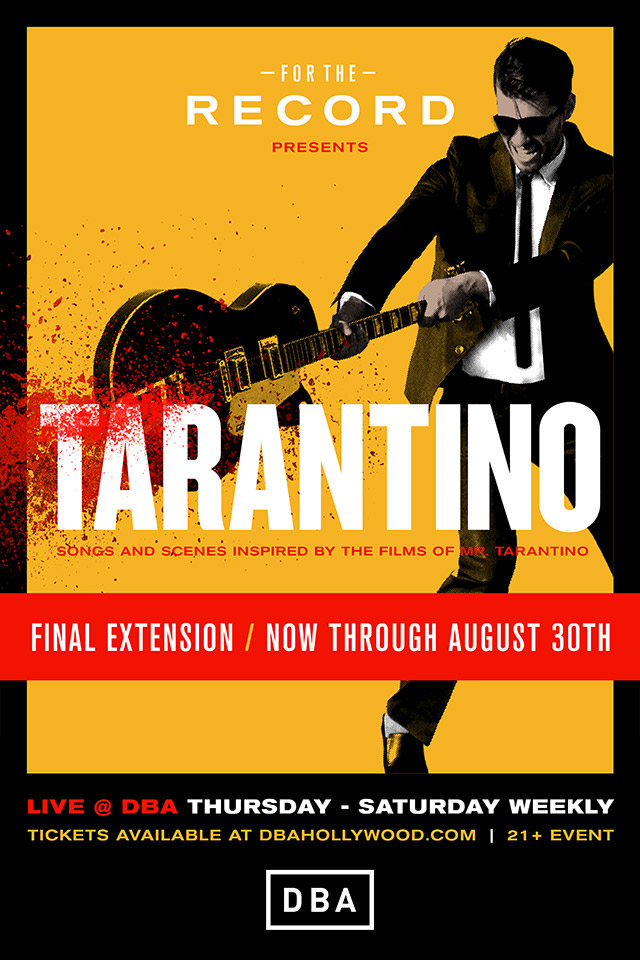 Los Angeles locals are lucky enough to encounter unforgettable talent at every turn, and the team behind For the Record certainly brought their best players for ‘Tarantino.’ The can’t-miss cabaret series left Los Feliz’s Rockwell Table and Stage for its debut at DBA, a new nightclub acting under artistic director and notorious nightlife impresario Simon Hammerstein. With a modern mash-up of Quentin Tarantino’s most notable films, the live-music event is an edgy, high-concept masterpiece, which is best described as sensory overload at every vantage point. ‘Tarantino’ transforms traditional entertainment and catapults the well-known nightclub outing into a captivating new direction. There’s just one week left to enter the wondrous world of  creators Shane Scheel, Christopher Lloyd Bratten and Anderson Davis, and you don’t want to miss it. Visit DBA Hollywood or For The Record Live for tickets.

If you’re a celebrity with expendable income, you should chuck your excessive purchases in favor of fighting the twisted online culture that violates copyright for sport. Such is the case with Quentin Tarantino who learned the hard way that you can’t trust anyone — not even SIX PEOPLE. Tarantino gave six insiders his new Hateful Eight script, only to discover that it somehow ended up online. My uneducated guess is that one of those people handed it off to an assistant to copy, and — you know the rest. Tarantino has since decided to shelve the script in its entirety, having lost all motivation to shoot it. He’s also suing Gawker for publishing a link to download the script, saying, “Gawker Media has made a business of predatory journalism, violating people’s right to make a buck. This time they’ve gone too far. Rather than merely publishing a news story reporting that Plaintiff’s screenplay may have been circulating in Hollywood without his permission, Gawker Media crossed the journalistic line by promoting itself to the public as the first source to read the entire screenplay illegally.” Hopefully, Tarantino will win, and bloggers everywhere will stop engaging in behavior that ruins the gift of Quentin Tarantino.