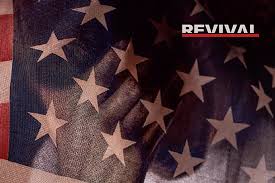 If you read the reviews, including a very detailed take-down in Variety and an effusive endorsement from Rolling Stone, you’d have zero idea what to believe about Eminem’s new album, Revival. And then there’s Paris Hilton, who called Eminem a “lyrical genius.” Apparently, she loved the album, which left me scratching my head as to whether that’s a good thing. After all, Paris Hilton is certainly NOT the arbiter of cool and her endorsement might represent something larger. Does this album speak to the hip hop community, or is it simply too mainstream? His choice of collaborators doesn’t help his case. Forgive me for not wanting to hear Ed Sheeren on an Eminem song.

Though I endlessly cover music on my blog, I’d fall short of calling myself a music critic. I’m certainly not going to offer a track-by-track breakdown. I’ll simply say it’s good. is it great? Probably not. It’s no secret that Eminem thrives with lyrics and falls short with production and beats. In casual conversation, someone close to me once compared Kanye’s rap ability to Eminem, which felt so out of touch it was laughable. Kanye would be the opposite. All production, minimal lyrics. Eminem is a poet, and music is a forum for him to express it. In the case of Revival, the chorus of each song is so annoying it should be left out. There’s no Dido juxtaposition that takes the song to the next level. Instead, it takes each song down a notch. Additionally, I don’t know who mixed this record, but the lyrics are way too low in comparison to the music. The music is actually getting in the way. It’s also worth noting that the “I Love Rock ‘N Roll” sample caused me physical pain.

I love Eminem. But sure — this could be better.