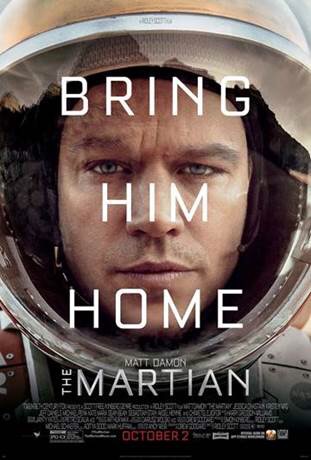 By Contributing Writer, C. Dillon
Ridley Scott is no stranger to science-fiction. He directed arguably two of the best sci-fi films ever made – Alien (1979) and Blade Runner (1982). Yes, his vision slipped a bit in his last foray into the genre with Prometheus (2012), but The Martian is much more reminiscent of the former than the latter.

Set in the 2030s, The Martian tells the story of astronaut Mark Watney, played to sarcastic perfection by Matt Damon. Watney is a member of Ares III, a manned mission to Mars that goes horribly wrong not long after the crew arrives. A fast moving storm descends on the team as they are gathering samples, forcing them to flee back to their ship for an emergency escape. As the storm rages, hurling debris at the astronauts and threatening to tip over their MAV (Mars Ascent Vehicle), the crew hurries to escape impending doom. It’s worth noting that while this film, and the book it was based on, are rightfully lauded for using only real science, this particular scene is “bad science.” The atmosphere on Mars is so thin that winds must be about 35 mph to move a piece of dust. This storm was so powerful that rocks and heavy equipment were tossed around like paper in a (terrestrial) tornado, and – as noted – threatened to push over a spaceship. The wind speeds necessary to do this are staggering. And yet, the characters manage to walk back to their ship as if it’s no more difficult than walking through a wading pool. When the tag line of the movie is that it’s going to “science the shit” out of the audience, this breaks the suspension of disbelief.
Of course, Watney does not escape and is left behind and presumed dead when his bio-monitor is destroyed by the flying debris. Thus begins the meat of the story – Watney is alone, millions of miles from help, out of contact with anyone else in the universe, and without the supplies to survive until the next manned mission to Mars arrives, four years later. What will he do? How will he survive, physically and psychologically, alone in the unforgiving Marian environment? The answer is with grim humor and super-MacGuyveresque science.

Damon as Watney really shines here, speaking only to himself or to video cameras and making the “dialogue” seem real, and meaningful. Without his charisma and wit, these scenes wouldn’t work. We feel connected to Watney’s loneliness, terror, and determination and present in his unimaginable surroundings. As he solves one problem after another – growing crops, keeping warm in his rover, trying to communicate with Earth – Damon stays both relatable and heroic in his small – but life-and-death significant – accomplishments. The supporting cast –Jeff Daniels, Chiwetel Ejiofor, Jessica Chastain, Sean Bean, Kate Mara, Michael Pena, Kristen Wiig, and others – is excellent, but this is primarily Damon’s movie to carry.

Of equal importance; however, is Mars itself, beautifully shot by cinematographer Dariusz Wolski. The Wadi Rum area of Jordan fills in for the red planet, and Wolski films it in sweeping, majestic splendor. While 3D effects are too often used for shock or to make the audience “duck” an object seemingly flying off the screen, here it is used to give lustrous depth to the expansive ridge lines and rolling dunes, and the result is engaging. As Damon’s performance pulls you into his psyche, the brilliant photography and 3D pulls you into Mars itself.

Meanwhile, back on Earth, the world at first memorializes Watney as a hero who gave his life for science. Once it is discovered that he is still alive, the struggle to save him begins. NASA wrestles with the decision to tell Watney’s crew about his discovered status, even though they can’t do anything to save him, and China’s space agency considers divulging classified information that may help. NASA and the Jet Propulsion Laboratory also rush to produce a rocket that could resupply their stranded astronaut in an attempt to both extend his supplies and traverse 1600 miles of inhospitable Mars-scape to reach the landing point of the next mission, all while Earth watches and waits for a solution to a seemingly unsolvable dilemma.

The Martian is not perfect, either as a film or as a completely realistic depiction of the Martian environment. And while the ending is predictable, safe, and expected, the tension is still maintained. The film is engaging, occasionally quite funny, and hits all the right emotional buttons. That it has to hit them so hard, in some cases, is perhaps what keeps it from being a great film. Four out of five stars.