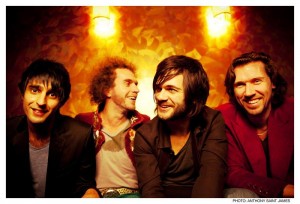 Last Sunday my friend invited me to The Hotel Cafe in Los Angeles to see Harper Blynn play.  The venue opened in 2000, and it is known for featuring new singer/songwriters. Harper Blynn started their performance with singer/songwriter Schuyler Fisk, who I later found out is Sissy Spacek’s daughter.  Despite her often described “folk” music, I actually found her to be a confusing cross between pop and country, with a strange resemblance (physically and musically) to Colbie Caillat.  To be fair, I must confess my limited musical knowledge, which explains why my only legitimate criticism of their combined performance is the strange blend of Fisk’s sweet looking, polished demeanor and the unwashed looking Harper Blynn boys.  To put it plainly, the chemistry was odd.  As soon as Harper Blynn played alone, the energy in the room completely changed.  The band is comprised of four band members, including: Pete Harper (keys and rhythm guitar); Jason Blynn (lead guitar); Sarab Singh (drums); and Whynot Jansveld (bass), and to quote Paste Magazine, who voted Harper Blynn the #1 new discovery of the CMJ Festival, “despite their Brooklyn address and hipster credentials, there’s nothing remotely indie rock about the band-the harmonies recall Simon & Garfunkel, and the melodies would make Elvis Costello proud.”  They promoted their new self-titled EP during the show, leaving out songs from their debut album, Loneliest Generation.  They closed the show with a cover of Beyonce’s Halo, which they’ve become known for after a previous performance of the cover went viral.  The biggest applause of the night came from the Halo cover, which I pondered for a bit before stumbling across a very well-written article by Jim Malec.  He said, “massively popular mainstream hits can be adapted under an indie aesthetic and made appealing to a young, hip crowd.”  And “It’s surprising that more indie artists don’t strive for that same type of catchiness in their own tunes.”  While I’m not sure I agree that Harper Blynn’s music lacks catchiness, I will say that their upcoming EP certainly sounds more catchy than their debut album.  It will be worth the wait. Watch their video for Loneliest Generation below.