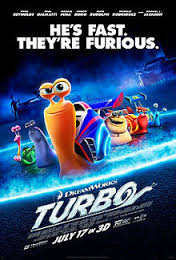 I’ve never understood the Snoop Dogg fascination, but since I’m the only one on the planet with that declaration, I’ve decided to post his new lyric video. The song, ‘Let the Bass Go,’ appears in ‘Turbo,’ the upcoming film from Dreamworks Animation. The film follows a snail who dreams of speed and wants to race the Indy 500. Watch the fun video below.