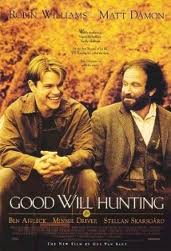 One thought on “What Happened to the Smart Superheroes? — Is ‘Good Will Hunting’ the End?”