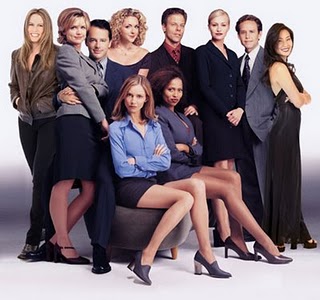 Let me start by saying Ally McBeal is my favorite show in television history.  Since the show, many of the actresses have said negative things about the experience.  One of those actresses is Portia De Rossi, who recently bashed a very memorable scene where she stripped down to her lingerie to seduce her boss.  De Rossi claimed it “shocked and disappointed” her, as her character went from a “really professional, hard-working woman to someone who just strips down to her underwear begging her boss to sleep with her.”  I remember the exact scene De Rossi is referring to, and I completely disagree with her assessment.  The scene had nothing to do with merely seducing a boss with sex.  Her character was in love with her boss, and although he was in love with her, he couldn’t consummate the relationship because of his dorky guy nerves.  She then got completely undressed in hopes that he would reciprocate.  It was a great scene and an incredible show, and I don’t appreciate De Rossi insulting David E. Kelly’s legendary writing.  The only explanation for her attack is her recent disclosure that she was anorexic while on the show, so perhaps she felt uncomfortable in her underwear.  But De Rossi admitted on Oprah that the pressure to be thin came only from herself, and the show’s producers never said a word to her.  If that’s true, then stop bashing Ally McBeal.