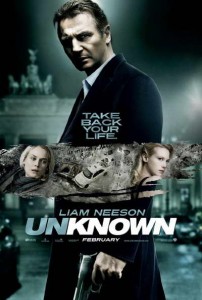 When Dr. Martin Harris (Liam Neeson) wakes up from a coma after his taxi driver spins off a bridge, he’s certain his wife is frantic, and he immediately leaves the hospital to find her.  When he arrives at his hotel to find his wife, she doesn’t recognize him, and she’s with another man named Dr. Martin Harris.  He’s convinced she’s being held against her will and forced to lie.  He spends the rest of the movie trying to prove his identity and subsequently rescue his wife.  So was his identity stolen, and did his wife play a part?  You’ll have to watch the movie to find out.  There’s certainly endless holes in the plot, but I can be a very forgiving viewer, especially when I’m on the edge of my seat for an entire movie.  There is one part of the story that deserves a special mention, though.  Diane Kruger plays the taxi driver, and it’s fantastic to see a female character that doesn’t stand on the top of mountain waiting for a man to rescue her.  She kicked some serious ass.  OVERALL RATING: SADISHFIED.