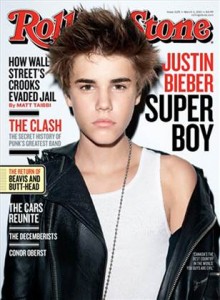 Rolling Stone was forced to release Justin Bieber’s original quote from his recent interview, after much public outrage and pressure from the Bieber camp.  The fiasco started when Rolling Stone asked Justin Bieber about his stance on abortion.  Here’s the quote with the omitted item in bold:  “Um. Well, I think that’s really sad, but everything happens for a reason. I don’t know how that would be a reason. I guess I haven’t been in that position, so I wouldn’t be able to judge that.”  First of all, I don’t even think Justin Bieber knows his stance on abortion.  Isn’t he ten years old?   Second, I think it’s completely ridiculous to ask this question at all.  Clearly they wanted media attention, and they knew that asking one of the most popular kids in America about abortion would cause the controversy necessary to get Rolling Stone some much-needed press.  And lastly, the omitted part of the quote is incredibly damaging to the magazine, as it completely changes the connotation of what he said. I’ve seen shady “journalism,” but this is completely disgusting.